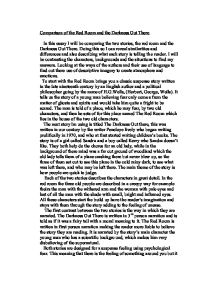 Comparison of the Red Room and the Darkness Out There

Comparison of the Red Room and the Darkness Out There In this essay I will be comparing the two stories, the red room and the Darkness Out There. Doing this so I can reveal similarities and differences and also describing what each story is telling the reader. I will be contrasting the characters, backgrounds and the situations to find my answers. Looking at the ways of the authors and their use of language to find out there use of descriptive imagery to create atmosphere and emotions. To start with the Red Room brings you a classic suspense story written in the late nineteenth century by an English author and a political philosopher going by the name of H.G.Wells, (Herbert, George, Wells). It tells us the story of a young man believing fear only comes from the matter of ghosts and spirits and would take him quite a fright to be scared. The man is told of a place, which he may fear, by two old characters, and then he sets of for this place named The Red Room which lies in the house of the two old characters. ...read more.

In the red room the three old people are described in a creepy way for example theirs the man with the withered arm and the woman with pale eyes and last of all the man with the shade with small, bright and inflamed eyes. All these characters start the build up have the reader's imagination and stays with them through the story adding to the feeling of unease. The first contrast between the two stories is the way in which they are narrated. The Darkness Out There is written in 3rd person narration and is told as if it was a fairy tail with a moral meaning to it. The Red Room is written in first person narration making the reader more liable to believe the story they are reading. It is narrated by the story's main character the young man who has a scientific background, which makes him very disbelieving of the supernatural. ...read more.

This makes the reader and characters views in the story change about the old woman and they begin to see her insensitive side. Another main character is Sandra a young girl who goes to help the old lady 'Mrs Rutter' with her homework. Sandra seems very naive at the start of the story and she also represents her generation of young people very well by being superficial and girly, but after hearing Mrs Rutter's story her views change about the world in general and she becomes less naive. The Red Room has a typical setting for a horror story with it being set in an old run down castle with 'chilly echoing passages' and spiritual staircases'. H.G well uses this imagery of a cold dark quite place throughout the story. The young mans journey is separated into two parts, The physical journey to the Red Room and the actual psychological fear journey inside the Red room. ...read more.