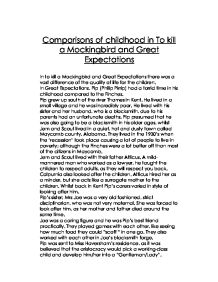 Comparisons of childhood in To kill a Mockingbird and Great Expectations

Comparisons of childhood in To kill a Mockingbird and Great Expectations In to kill a Mockingbird and Great Expectations there was a vast difference of the quality of life for the children. In Great Expectations, Pip (Philip Pirrip) had a torrid time in his childhood compared to the Finches. Pip grew up south of the river Thames in Kent. He lived in a small village and he was incredibly poor. He lived with his sister and her husband, who is a blacksmith, due to his parents had an unfortunate deaths. Pip presumed that he was also going to be a blacksmith in his older ages, whilst Jem and Scout lived in a quiet, hot and dusty town called Maycomb county, Alabama. They lived in the 1930's when the 'recession' took place causing a lot of people to live in poverty; although the Finches were a lot better off than most of the citizens in Maycomb. ...read more.

They also worked with each other in Joe's blacksmith forge. Pip was sent to Miss Haversham's residence, as it was believed that the aristocracy would pick a working-class child and develop him/her into a "Gentleman/Lady". When at Miss Haversham's residence, Pip was ridiculed by Estella (Miss Haversham's adopted daughter). Once she said "You coarse little monster, what do you think of me now" after Pip proclaimed that she was pretty. The Victorian aristocracy always looked down at the working class, as they believed they were the dirt on the bottom of the sole on their shoe, whilst in Maycomb, The children had a much better education as it was law in Alabama for all children to go to school. Although it was compulsory to go to school Scout was over-achieving in her class as her father Atticus and Calpurnia taught her how to read and write before her fellow pupils. ...read more.

On the other hand, In Pip's childhood, he was not allowed to play, as Mrs Joe would have disciplined him. The only time Pip was allowed to play was when he went to Miss Haversham's, but most times he was played with as Estella treated him as a rag-doll by abusing him with mind-games. Pip's Christmas was an ordinary day to Pip except they had their lunch in the parlour, which he is not normally allowed in. He received no gifts In Maycomb Jem and Scout's Christmas was very eventful. Their cousin accused Atticus of been "a nigger lover". So Scout retaliated by punching him in the nose. Jem and Scout also received gifts. They both got air rifles. Overall I believe Jem and Scout had a better childhood compared to Pip, even though Scout was nearly murdered by Bob Ewell, it was nothing compared to Pip's constant abuse and ridicule by Mrs Joe and Miss Haversham. ...read more.