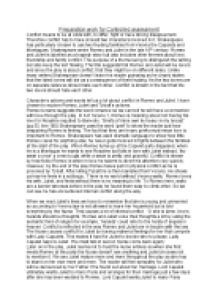 Conflict in Romeo and Juliet

﻿Preparation work for Controlled assessment Conflict means to be at odds with, to differ, fight or have strong disagreement. Therefore conflict has to have at least two characters involved in it. Shakespeare has particularly chosen to use two feuding families from Verona the Capulets and Montagues. Shakespeare wrote Romeo and Juliet in the late 16th century. Romeo and Juliet is labelled as a tragedy story but also includes other themes about love, friendship and family conflict. The purpose of a theme being to distinguish the writing but also keep the text flowing. The title suggests that Romeo and Juliet will be lovers and since the play is about conflict; that they might be on different sides. Unlike many writers Shakespeare doesn?t leave his reader guessing as he clearly states that the fated lovers will die as a consequence of their feuding. As the two lovers are on separate sides so should hate each other. ...read more.

Conflict is shown by how fickle Romeo is when in love he seems to divert his attention very quickly. However, by the end of the play Romeo takes part in physical conflict as he is provoked by Tybalt. After killing Tybalt he is then banished from Verona. He shows us how he feels in a soliloquy, ?There is no world without Verona walls,? Romeo loves his wife, Juliet, and feels without there is no meaning to life. To Romeo here, walls are a barrier whereas before in the play he found them easy to climb other. So we can see he has encountered internal conflict along the way. When we read Juliet?s lines we have to remember that she is young and unmarried so according to Verona law is not allowed to leave her household but is told everything by the Nurse. This causes a lot of internal conflict. ...read more.

Lord Capulet ultimately wants Juliet to marry Paris and arranges for their marriage just a few days after she has been wedded to Romeo. Lord Capulet wants Juliet to marry Paris as he is rich, ?The most you sought was her promotion.? Conflict is shown by the fact that a Father should love his daughter but LC needs her for money. When she disobeys, he insults her by calling her ?baggage? and ?tallow face?. The reader feels sympathy for both Juliet but also her Father because he has spent so much time to shape Paris into a man worth his daughter and she has had a hard time. Even death creates conflict for Juliet as Romeo hasn?t left any poison in the bottle or on his lips. Juliet?s only friend is the dagger, ?happy dagger?. By this phrase we see that Juliet has a conflicted mind as she thinks opposite to us. A normal person wouldn?t think of a dagger as a lovely object. The dagger is a personified object to make it more real to the reader. ...read more.

This essay is underdeveloped and therefore shows only a superficial understanding of the text. It is good that points are trying to be linked but each point does need to be developed individually first.
3 Stars