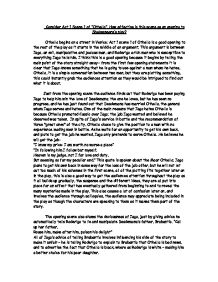 Consider Act 1 Scene 1 of &quot;Othello&quot;. How effective is this scene as an opening to Shakespeare's play?

Consider Act 1 Scene 1 of "Othello". How effective is this scene as an opening to Shakespeare's play? Othello begins on a street in Venice; Act 1 scene 1 of Othello is a good opening to the rest of the play as it starts in the middle of an argument. This argument is between Iago, an evil, manipulative and jealous man, and Roderigo a rich man who is susceptible to everything Iago tells him. I think this is a good opening because it begins by telling the main point of the story straight away - from the first few opening statements it is clear that Iago knows something that he is going to use against a man whom he hates, Othello, it is a simple conversation between two men, but they are plotting something, this could instantly grab the audiences attention as they would be intrigued to find out what it is about. Just from the opening scene the audience finds out that Roderigo has been paying Iago to help him win the love of Desdemona; the one he loves, but he has seen no progress, and he has just found out that Desdemona has married Othello, the general whom Iago serves and hates. ...read more.

The opening scene also shows the deviousness of Iago, just by giving advice he automatically tells Roderigo to lie and manipulate Desdemona's father, Brabantio. "Call up her father, Rouse him, make after him, poison his delight" All of Iago's advice of telling Brabantio involves influencing his side of the story to make it unfair - he is telling Roderigo to explain to Brabantio that Othello is bad news, and to advertise the fact that Othello is black, where as Roderigo is white - making him a better choice for his poor daughter. In order to do this, the two men come to the street outside the house of Desdemona's father, Brabantio, and cry out that he has been robbed by "thieves." Brabantio, a Venetian senator, comes to the window. At first, he doesn't believe what he hears, because he has told Roderigo to stay away from his daughter before and thinks Roderigo is merely scheming once again in order to see Desdemona, which ironically he is. ...read more.

by messing around with peoples feelings and emotions - managing to get them to do reckless things (also happens a lot later on) yet he always manages to leave the scene before he gets involved in the situation. I think that this is also another good way of beginning the play as it shows signs of what is soon to come next. Overall I think that this is a very effective way to open a Shakespeare play as it is very dramatic instantly and gives enough of the story to know vaguely what the story will be about but it also leaves a lot out to make it very interesting - I think it would make the audience want to carry on watching to see what will happen is it is not entirely predictable of what may happen just from the opening scene - although it is very informative. It is almost like a cliffhanger as it keeps the audience in suspense about the main character, as they do not get to meet him to begin with, this is a dramatic way to begin the play. ...read more.