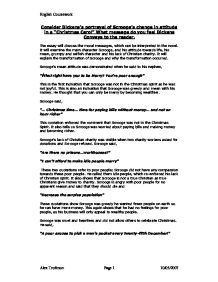 Consider Dickens's portrayal of Scrooge's change in attitude in a &quot;Christmas Carol&quot;. What message do you feel Dickens Conveys to the reader?

Consider Dickens's portrayal of Scrooge's change in attitude in a "Christmas Carol" What message do you feel Dickens Conveys to the reader. The essay will discuss the moral messages, which can be interpreted in the novel. It will examine the main character Scrooge, and his attitude towards life, his mean, grumpy and selfish character and his lack of Christian charity. It will explain the transformation of Scrooge and why the transformation occurred. Scrooge's mean attitude was demonstrated when he said to his nephew, "What right have you to be Merry? You're poor enough" This is the first indication that Scrooge was not in the Christmas spirit as he was not joyful. This is also an indication that Scrooge was greedy and mean with his money. He thought that you can only be merry by becoming wealthier. Scrooge said, "... Christmas time... time for paying bills without money... and not an hour richer" This quotation enforced the comment that Scrooge was not in the Christmas Spirit. It also tells us Scrooge was worried about paying bills and making money and becoming richer. Scrooge's lack of Christian charity was visible when two charity workers asked for donations and Scrooge refused. Scrooge said, "Are there no prisons...workhouses?" "I can't afford to make idle people merry" These two quotations refer to poor people; Scrooge did not have any compassion towards these poor people. He called them idle people, which re-enforced his lack of Christian spirit. It also shows that Scrooge is not a true Christian as true Christians give money to charity. ...read more.

"The common welfare... charity, mercy, forbearance, and benevolence" These are reference to how humans should behave in this life. Scrooge's attitude towards the ghost was relaxed and thought the ghost has no relevance to him. He asked a question "Could I take'em all at once and have it over with" This showed that he was still worried about his business; as he does not want to lose time focusing on it. Dickens introduced humour into the novel as it is a time when the reader least expects Scrooge to show a relaxed attitude. The ghost of Christmas Past tried to demonstrate to Scrooge and the reader that Scrooge had transformed and was not always monotonous and ill tempered. The first time in the novel Scrooge was laughing when shown "Ali Baba". This showed that Scrooge did have another side to him. The spirit also hinted to Scrooge that Scrooge had transformed into a grumpy man. It seemed Scrooge had forgotten what he was like when he was younger. The spirit said, "...Strange to have forgotten it" Scrooge regretted the things he had done in life. The moral message is that it is not too late to change your ways as God is forgiving. Scrooge regretted what he had done in the past when he said, "...A boy singing Christmas Carol...I should have given him something." The moral message here was that it was all right to regret because you know you have done wrong and you have learnt from your mistakes. ...read more.

Scrooge was given a chance and he does finally take. This is evident in the ways he behaves after the Ghost of the Future. He complimented a boy and said "What a delightful boy!" This was very rare for Scrooge to be kind to children. He also becomes in the Christmas Spirit as he asks a child to bring turkey. Scrooge also went to see Fred where he brought joy and happiness. He helped the struggling Cratchits and Tiny Tim did no die showing charity and compassion. These were all the qualities, which was not visible at the beginning of the novel. It showed that he had transformed into a kind and loving man. The moral message is to be inspired by Scrooge's transformation and try to transform you into the 'new' Scrooge. Dickens tries to encourage people to educate the poor; he is trying to show the effects if we do not help the poor. Conclusion 'A Christmas Carol' is undoubtedly a moral novel. This was visible in many parts of the novel. There are both indirect and direct moral messages. The why many people find it moralistic. Many people in the world can relate to issues discussed in the novel. These include greed, not donating to charity, helping poor and needy, regret, compassion, Scrooge was given a chance but many in reality will not be given one The novel changes from telling how not to behave but also tells them how to behave through the character of Scrooge. ?? ?? ?? ?? English Coursework Alex Trofimov Page 1 10/05/2007 ...read more.