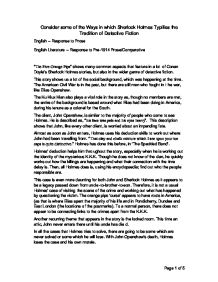 Consider some of the Ways in which Sherlock Holmes Typifies the Tradition of Detective Fiction English - Response to Prose English Literature - Response to Pre-1914 Prose/Comparative "The Five Orange Pips" shows many common aspects that feature in a lot of Conan Doyle's Sherlock Holmes stories, but also in the wider genre of detective fiction. This story shows us a lot of the social background, which was happening at the time. The American Civil War is in the past, but there are still men who fought in the war, like Elias Openshaw. The Ku Klux Klan also plays a vital role in the story as, though no members are met, the entire of the background is based around what Elias had been doing in America, during his tenure as a colonel for the South. The client, John Openshaw, is similar to the majority of people who come to see Holmes. He is described as, "his face was pale and his eyes heavy". This description shows that John, like every other client, is worried about an impending fate. Almost as soon as John enters, Holmes uses his deduction skills to work out where John had been travelling from. "That clay and chalk mixture which I see upon your toe caps is quite distinctive." Holmes has done this before, in 'The Speckled Band'. Holmes' deduction helps him throughout the story, especially when he is working out the identity of the mysterious K.K.K. Though he does not know of the clan, he quickly works out how the killings are happening and what their connection with the time delay is. ...read more.

This is similar to many Sherlock Holmes stories. In "The Five Orange Pips", the three casualties' bodies show no signs of any violence and in "The Speckled Band"; Julia Stoner's body does not show a cause of death. As always, it is Holmes that finally manages to deduce how the crime happened and swiftly wants to test his "little theory". The use of the word "little theory" tells us that Holmes believes that this case is not one of great importance or magnificence, only a small affair with, what Holmes thinks is an obvious answer. "The Man with the Twisted Lip" has a different ending from most of the other Sherlock Holmes's books as no one is arrested or blamed for the crime. In this story, it is simply because the crime did not happen and Neville St. Clair was still alive, although he was disguised as Hugh Boone. St. Clair just gets a warning to stop disguising himself as a beggar and then he leaves to go home. This is unusual for a detective story as in the majority of them, an actual crime has happened. In "The Five Orange Pips", the culprits of the crime, the Ku Klux Klan, are never brought to justice for the murders they have committed, but, most probably, die on their sinking ship. Another story in which the police are involved in the catching of the criminal is 'The Red Headed League'. This story is set completely in London and at first shows no sign of a crime, when Jabez Wilson comes to see Holmes about the fact his good-paying second job has ended. ...read more.

Notes play a big part in "The Five Orange Pips", in which each member of the family of John Openshaw each get a note, with five orange pips, telling them to put the papers on the sundial. Holmes prides himself in knowing nearly everything about everything. In "The Red-Headed League", he navigates himself around London without struggle and easily tells Watson the surrounding buildings of Saxe-Coburg Street. In "A Scandal in Bohemia", we find out that he keeps an index of people, most of the information he will never need to know. For example, around Irene Adler's profile are the profiles of a Hebrew Rabbi and a commander who wrote about fish. Clay believes himself to be a Royal, though he isn't officially recognised by the Royal Family. He asks to be called "Sir" and will only cooperate with the police when Peter Jones, sarcastically, says, "Well, would you please, sir, march upstairs, where we can get a cab to carry your Highness to the police-station?" When Jabez is describing his assistant to Holmes, Holmes already has a very good guess of what crime could be committed. When Jabez comments on a splash of acid on his forehead: "Holmes sat up in his chair in considerable excitement. "I thought as much," said he." This shows us the excitement that Holmes gets from working something out. Holmes says that deduction is his stimulus, but when he is without that stimulus he resorts to cocaine, cigarettes and pipes to make his brain work. Although Watson constantly tells him about the dangers of this habit, Holmes continues nonetheless. ...read more.