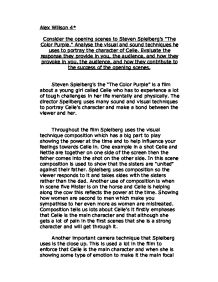 Alex Willson 4* Consider the opening scenes to Steven Spielberg's "The Color Purple." Analyse the visual and sound techniques he uses to portray the character of Celie. Evaluate the response they provide in you, the audience, and how they provoke in you, the audience, and how they contribute to the success of the opening scenes. Steven Spielberg's the "The Color Purple" is a film about a young girl called Celie who has to experience a lot of tough challenges in her life mentally and physically. The director Speilberg uses many sound and visual techniques to portray Celie's character and make a bond between the viewer and her. Throughout the film Spielberg uses the visual technique composition which has a big part to play showing the power at the time and to help influence your feelings towards Celie in. One example in a shot Celie and Nettie are together on one side of the screen then the father comes into the shot on the other side. In this scene composition is used to show that the sisters are "united" against their father. Spielberg uses composition so the viewer responds to it and takes sides with the sisters rather than the dad. ...read more.

Spielberg very effectively uses the camera techniques tracking and panning in the film. Tracking is used to keep move with the action as if you are there in the film with Celie. Panning is used by Spielberg to move from one thing to another in a quick action, he often use this from a happy to sad scene so you your emotions change very quickly creating more shock. Tracking is used in the first scene following the girls, shows they are innocent by skipping. This makes you feel as if you are moving with them and feel happy. The pace of tracking therefore creates lots of energy. Panning occurs in the scene when Celie' is walking thinking very heavily. She is just walking innocently then the camera quickly pans to the coffin of her mother with immediate action and this makes you feel sympathy for Celie very quickly. A very subtle visual technique but very effective is editing. Spielberg uses editing very well between the first scene and the second scene. At the end of the first scene it is quite happy in the sunny fields then it changes to Celie in a dark scene screaming. The first scene when it is placed next to the second scene makes the second scene much more dramatic. ...read more.

The words chosen that the father say are chosen very carefully as they are used to make the father look very mean to the girls. For example some of the first words he speaks to Celie are "You have the ugliest smile on this side of creation." The father doesn't speak a lot but the words he does speak are very mean and insulting making the viewer take sides between the father and Celie. The voice over sound technique is only used one in the opening scenes. The voice over means that you can listen to Celie's real feelings which she may not express on the outside. When Celie is walking with her mother's coffin the voice over is used getting inside her head. The voice used is her voice, which makes the scene even sadder as her voice is very quiet and upset. Spielberg uses this technique to make you to feel for Celie in her present situation. To conclude I think Spielberg has taken a lot of thought to use these visual and sound techniques very well to portray Celie's character and done it very successfully. The scenes don't all follow the same mood and often change and by making Celie receive a lot of pain this makes the viewer to carry on watching. To see if Celie overcomes her trauma and gets revenge on her father. ...read more.