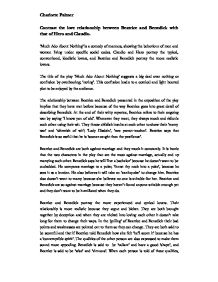 Contrast the love relationship between Beatrice and Benedick with that of Hero and Claudio. 'Much Ado About Nothing' is a comedy of manners, showing the behaviour of men and women living under

Contrast the love relationship between Beatrice and Benedick with that of Hero and Claudio. 'Much Ado About Nothing' is a comedy of manners, showing the behaviour of men and women living under specific social codes. Claudio and Hero portray the typical, conventional, idealistic lovers, and Beatrice and Benedick portray the more realistic lovers. The title of the play 'Much Ado About Nothing' suggests a big deal over nothing or confusion by overhearing; 'noting'. This confusion leads to a comical and light hearted plot to be enjoyed by the audience. The relationship between Beatrice and Benedick presented in the exposition of the play implies that they have met before because of the way Beatrice goes into great detail of describing Benedick. At the end of their witty repartee, Beatrice refers to their ongoing war by saying 'I know you of old'. Whenever they meet, they always mock and ridicule each other using their wit. They throw childish insults at each other to show their 'merry war' and 'skirmish of wit'; 'Lady Disdain', 'rare parrot-teacher'. Beatrice says that Benedick is so awful that he is 'sooner caught than the pestilence'. ...read more.

In each soliloquy, Beatrice and Benedick say they will change and love each other; 'I will requite thee', but Beatrice is quicker to say she will change. Benedick's soliloquy is written in prose and he worries too much about his reputation as a man and what his friends will think and say about him. He thinks they will mock him so he makes up excuses for his changes; 'when I said I would die a bachelor, I did not think I would live till I were married'. Beatrice doesn't worry about her reputation and about people mocking her because she loves Benedick. When Hero is humiliated by Claudio, Beatrice asks Benedick to prove his love by killing his noble friend: Claudio. By asking him to do this, it is as if Beatrice is testing Benedick's love for her. When Benedick agrees to this it shows how much he loves Beatrice and what he is willing to do for love. In the play we also see Benedick trying to write poetry for Beatrice which is almost as if he has turned into a conventional lover. ...read more.

When Claudio is tricked into thinking Hero is having an affair he doesn't confront her about it, he decides to humiliate her in front of everyone because he is worried about his reputation so he wants to ruin hers. When calls her a 'rotten orange' and an 'approv�d wanton' she just acts confused instead of denying everything. When Claudio humiliates her at the altar, Hero doesn't try to defend herself she just says 'is my lord well, that he doth speak so wide' which shows she is in disbelief. When Claudio finds out that Hero was innocent and that he had "killed" her for no reason he mourns her because he feels guilty. At the wedding when he finds out Hero is alive she still shows signs of passiveness and is very quick to forgive him, unlike Beatrice who would have probably yelled at him. The relationship between Beatrice and Benedick in the play is more evenly matched than that of Hero and Claudio's where Claudio is the more dominant partner. In some ways, both relationships are influenced by reputation at some point: Benedick's reputation for being a bachelor and Claudio's reputation and how it influences his actions towards Hero. ?? ?? ?? ?? Charlotte Palmer ...read more.