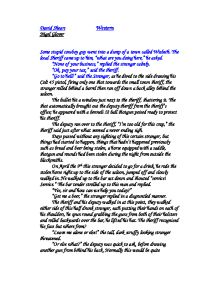 David Shears Western Nigel Glover Some stupid cowboy guy went into a dump of a town called Wisbech. The local Sheriff came up to him, "what are you doing here," he asked. "None of your business," replied the stranger calmly. "Ok, pay your tax," said the sheriff. "Go to hell!" said the Stranger, as he dived to the side drawing his Colt 45 pistol, firing only one shot towards the small town sheriff, the stranger rolled behind a barrel then ran off down a back alley behind the saloon. The bullet hit a window just next to the sheriff, shattering it. The shot automatically brought out the deputy sheriff from the sheriff's office; he appeared with a benneli 12 ball shotgun poised ready to protect his sheriff. The deputy ran over to the sheriff, "I'm too old for this crap," the sheriff said just after what seemed a never ending sigh. Days passed without any sighting of this certain stranger, but things had started to happen, things that hadn't happened previously such as bread and beer being stolen, a horse equipped with a saddle, shotgun and rounds had been stolen during the night from outside the blacksmiths. ...read more.

He wore his best clothes as if anything happened and he was to get hurt then at least he would look good, and the only thing he liked more than being a hero was to look good. He went over to a tall wooden cabinet in the corner of his room and pulled out a fancily decorated wooden box, he opened it and pulled out two silver and black 6-shooters, he holstered them and ran out of the saloon jumped on to his stolen horse and rode off as fast as he could. Meanwhile the sheriff was in his office, without any idea of what was going to happen during this bright sunny day. Although his deputy was acting quite strange it didn't click as to why. It was just coming up to 11:15am and the deputy said he needed to stretch his legs and so went for a walk. This was perfect timing as at about 11:20am the sheriff was going through some paper-work and his son burst in his office, shouting "quick! Lock the door and get your gun." "What in gods name are you doing here, and what do you want!" the sheriff replied in an uncertain voice. ...read more.

Martin peered around the blind and then drew his 2 guns and ran to the other side of the window, Bob then drew his guns, they were both poised ready to fire. Bob looked at Martin and Martin looked straight back into his son's eyes, then as if it had been planned they both turned and walked through the blind and opened fire shooting bang! Bang! went the shots as the courageous but slightly dim opponents fell to the ground. Bob and Martin looked at each other then calmly walked out through the bedroom and down the stairs out into the town square and over to the bodies, there was only four; the deputies was missing, where was he both of the men thought. Bob looked up and saw the deputy standing just at the edge of an alley, next to the saloon he had his gun in his hand arm stretched out ready to fire, the sheriff hadn't seen the man ready to kill him. Bang! Bob dived in front of his father drawing his gun at the same time as taking a bullet in the shoulder and firing the gun he had been shot, saved his father and shot the assailant all at the same time. Fortunately Bob was alright. To top it off in front of everybody in the town centre he was made the new town deputy sheriff! ...read more.