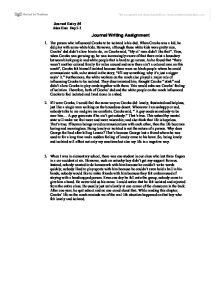 Journal Writing Assignment 1. The person who influenced Crooks to be isolated is his dad. When Crooks was a kid, he did play with some white kids. However, although those white kids were pretty nice, Crooks' dad didn't allow him to do, as Crooks said, "My ol' man didn't like that". Thus, when Crooks was growing up, he was increasingly aware of that there exist a boundary between black people and white people that is hard to go across. As he found that "there wasn't another colored family for miles around and now there ain't a colored man on this ranch", Crooks felt himself isolated because there were no black people whom he could communicate with, as he stated in the story, "If I say something, why it's just a nigger sayin' it." ...read more.

2. If I were Crooks, I would feel the same way as Crooks did: lonely, frustrated and helpless, just like a single man walking on the boundless desert. Whenever I am unhappy or sad, nobody talks to me and give me comforts. Crooks said, " A guy needs somebody-to be near him... A guy goes nuts if he ain't got nobody." That's true. This unhealthy mental state will make me feel more and more miserable; and also think that life is hopeless. That's true. If human beings avoid communications with each other, then the life becomes boring and meaningless. Being lonely or isolated is not the nature of a person. ...read more.

Instead, nobody wanted to do homework with him because he couldn't write words quickly; nobody liked to play sports with him because he couldn't even hold a ball in his hands; nobody would like to make friends with him because they felt embarrassed of staying with a handicapped person. Even one day he fell onto the group, nobody came to give him a hand. He never told us his name. I could notice that he felt isolated and rejected from the entire class. He usually just sat silently at one corner of the classroom in the back. After one year, he quit school and no one cared about that. While reading this chapter, Crooks' life on the ranch reminds me of the real-life situation happened on that boy who felt lonely and isolated. ?? ?? ?? ?? Journal Entry #4 Alex Hua Day1-1 ...read more.

This response is for a question that asks candidates about Crooks' isolation on the ranch. To achieve top marks here, candidates must differentiate between what they believe to be isolation and what they believe to be loneliness, as both are different things. They must also show evidence of understanding how each plays a part in Crooks' existence. This candidate however, does not successfully analyse Crooks' character to it's fullest extent. Only the first paragraph (there is a lack of introduction) actually associates itself with Crooks' character and therefore is the only point where the candidate answers the question. Ultimately, what is written in this first paragraph would be sufficient ammunition to attack the question with, if only the candidate had fattened out their analysis and provided a deeper understanding of the novel, the context, the character and, more particularly, the role of isolation in that character's life.
The lack of introduction will lose all candidate marks. Structuring an essay with a clear introductory paragraph and a concluding one shows an ability to write as is considered the standard form for essay writing. Without them, the candidate is automatically relagated to a low C because they are not showing an understanding of how to write according to essay standards.

The Level of Analysis is very much taken at face value. There is some evidence of effort to include contextual appreciation in the form ofracical equality at the time, but it, like a lot of the answer is very basic and based off of common knowledge, rather than insightful external research into how this affect Crooks' character and isolation on the farm.
To improve this answer, the candidate might turn to the contents of Crooks' room and what Steinbeck puts in it; how does this portray his character and his sense of loneliness? Further elaboration on his interactions with the other characters will also improve this answer, as it shows the examiners the candidate possesses the ability to analyse character and the roles each character plays within the novel - noticing and analysing things such as, how Crooks' encounter with George, Lennie, Candy and Curly's wife leaves him elated by the prospect of achieving the American Dream but then, after the sudden rush of blood to the head, he ends up just as he did before the scene began - rubbing liniment on his back; highlighting his loneliness and isolation.
Being an anaytical response, there is no requirement for the candidate to put themselves in Crooks' shoes. "If I were Crooks'..." is unnecessary and elicits no marks, so it is disconcerting to see that two whole paragraphs of equal length to the first have been dedicated to a personal response. Candidate should avoid giving direct personal responses to analytical questions unless there is a clear requirement of it in the question itself e.g. "How do you react to Crooks' isolation on the ranch?".

The Quality of Written Communication (QWC) is average. There are moments where typing errors may contribute to a misunderstanding of the candidates' answer: "They discriminated him, thought Crooks Ã¢â‚¬Å“stinkÃ¢â‚¬Â" and "he was increasingly aware of that there exist a boundary between black people and white people that is hard to go across". Incosistencies in grammar and syntax like these prevent the candidate from receiving the highest band of QWC marks, and the few spelling errors that feature in the answer also lower the QWC mark. Candidate will do well to spell-check and proof-read their answer for QWC before submission/closing the exam booklet in order to maximise their chances at scoring high in QWC marks.