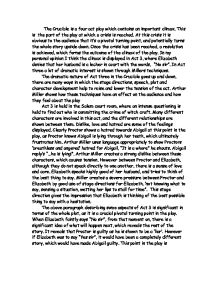 The Crucible is a four act play which contains an important climax. This is the part of the play at which a crisis is reached. At this crisis it is obvious to the audience that it's a pivotal turning point, and potentially turns the whole story upside down. Once the crisis has been reached, a resolution is achieved, which forms the outcome of the climax of the play. In my personal opinion I think the climax is displayed in Act 3, where Elizabeth denies that her husband is a lecher in court with the words, "No sir". In Act three a lot of dramatic interest is shown through Millers techniques. The dramatic nature of Act three in the Crucible goes up and down, there are many ways in which the stage directions, speech, plot and character development help to raise and lower the tension of the act. Arthur Miller shows how these techniques have an effect on the audience and how they feel about the play Act 3 is held in the Salem court room, where an intense questioning is held to find out who is committing the crime of witch craft. Many different characters are involved in this act, and the different relationships are shown between them. Dislike, love and hatred are some of the feelings displayed. Clearly Proctor shows a hatred towards Abigail at this point in the play, as Proctor knows Abigail is lying through her teeth, which ultimately frustrates him. ...read more.

Tension is created with the questioning of John Proctor. The questioning follows Danforth's comment that the "hot fire here...melts down all concealment", this reminds the audience of what John Proctor has concealed. The purpose of this questioning sequence is to establish Proctors status as a Christian, to establish his truthfulness and finally to establish Proctors cause and purpose. Parris and Cheever both make potentially damaging contributions towards proctor in the questioning. Cheever states "He plough on Sunday sir", and then Parris asks "Do you read the Gospel, Mr. Proctor?". These accusing questions are spelt out at Proctor to reveal his status as a Christian of truthfulness. Proctor deals with the intense questioning with intelligence, a lot of Proctors answers in this sequence are short and quick. This direct dialogue creates the surety of Proctor. "Aye sir...No sir...I am sir...". The pace of this sequence of the questioning seems to be a quick pace. The questions are straight after one another, creating a fast pace. Miller uses these short sentences to create a rush of tension amongst the characters. Miller uses different use of dialogue, Danforth's lines on page 72 seem quick, demanding, punchy and to the point. He says a lot more than Cheever and Hale which gives the impression that Danforth has a lot of power, and is sending off a forceful side. Danforths speech at the top of page 76 "...a person is either with this court of he must be counted against it, there is no road between". ...read more.

The US government was much like the men in Salem, eagerly arresting and putting on trial anyone who might have been considered a communist until it spiraled out of control and no one was safe, like in The Crucible. The end of Act three has a lot of dramatic interest. Everything and everyone seems to be very manic, panicked, frantic and hysterical. When Mary joins in with Abigail screaming that they love god, promising to "hurt you no more". Proctor is in disbelief and shocked at the girls acting, this feeling is mirrored by the audience who feel the tension mounting rapidly, Proctor loses control and shouts [his mind wild and breathless] " I say - I say- God is dead", this quotation shows his state of mind. Although he may seem berserk; all that he says is true, especially his last words " you are pulling heaven down and raising up a whore!", Hale leaves after this. The curtain falls, and the audience is left emotionally drained in this act from all the action. All the tension and hysteria that was building up in previously reaches a climax at the end of this act. Act four follows on from Act three from its preparation. It is staged in the isolated jail of Salem. The stage directions tell us that the place is in darkness and that the moonlight only 'seeps' in through the bars. This creates a depressing atmosphere and this is evidence that the end was certain and there is little hope in freedom. ...read more.