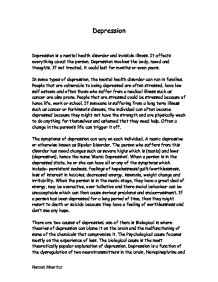 Depression is a mental health disorder and invisible illness. It affects everything about the person.

Depression Depression is a mental health disorder and invisible illness. It affects everything about the person. Depression involves the body, mood and thoughts. If not treated, it could last for months or even years. In some types of depression, the mental health disorder can run in families. People that are vulnerable to being depressed are often stressed, have low self esteem and often those who suffer from a medical illness such as cancer are also prone. People that are stressed could be stressed because of home life, work or school. If someone is suffering from a long term illness such as cancer or Parkinson's disease, the individual can often become depressed because they might not have the strength and are physically weak to do anything for themselves and ashamed that they need help. Often a change in the person's life can trigger it off. The symptoms of depression can vary on each individual. A manic depressive or otherwise known as Bipolar Disorder. ...read more.

Depression is a function of the dysregulation of two neurotransmitters in the brain, Norepinephrine and serotonin. Neurotransmitters are chemical substances in the brain which allow one neuron to communicate with another neuron across the gap between neurons. The brain contains various neurotransmitters, each having concentrations in specific parts of the brain. The parts of the brain seemingly most affected in depression are those involved with mood, cognition, sleep and appetite. The Psychological theories of depression are an Object Relations theory which is about child development processes and the difficulty of coping, The Attachment theory is about bonding when infants are not getting the healthy bond they need between their mothers, fathers, for example, the infants parents have gone through drug addictions when the infant was growing up without knowing what to do or the knowledge and being helpless can have a massive psychological effect on the infant. The Learned Helplessness theory is about when an individual has reached a point where he or she realise they do not have the ability to reach their desired goal and consider themselves as worthless because they have failed. ...read more.

They pass signals from one brain cell to another and the chemicals most involved in depression are thought to be Serotonin and Noradreline. Along with any prescribed drug, there come side effects. The side effects of taking antidepressants is dry mouth, constipation, bladder problems, blurred vision, dizziness, drowsiness, headaches, nausea, agitation. Not every person experiences these side effects. There is also herbal therapy that may help people who are depressed. St Johns wort is a yellow covered flower that is used to treat the milder form of depression. Also Ephedra, Gingko Biloba, Echinacea and Ginseng are used as supplements in treating depression. In conclusion, depression is an extreme form of sadness which can be triggered by a death, birth of a child, also bullying can make the sufferer worse and then they feel they have no choice but suicide. Depression is a topic which has a vast amount of information on it and a person could research one small aspect of it and receive a huge amount back, this essay only gives a background of what causes it, the symptoms, treatments involved. Hannah Mcarthur ...read more.