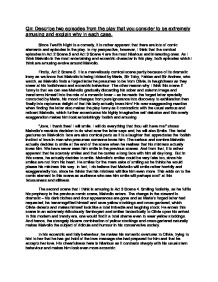 Describe two episodes from the play that you consider to be extremely amusing and explain why in each case.

Qn: Describe two episodes from the play that you consider to be extremely amusing and explain why in each case. Since Twelfth Night is a comedy, it is rather apparent that there are lots of comic elements and episodes in the play. In my perspective, however, I think that the comical episodes in Act 2 Scene 5 and Act 3 Scene 4 are the most hilarious and interesting ones. As I think Malvolio is the most entertaining and eccentric character in this play, both episodes which I think are amusing evolve around Malvolio. Firstly, Act 2 Scene 5. It is a marvellously comical scene partly because of its dramatic irony as we know that Malvolio is being tricked by Maria, Sir Toby, Fabian and Sir Andrew, who watch, as Malvolio finds a forged letter he presumes to be from Olivia, in haughtiness as they sneer at his foolishness and eccentric behaviour. ...read more.

We have never seen him smile in the previous scenes. And from that, it is rather apparent that he scarcely smiles and that he carries a long face with him all day long. But in this scene, he actually decides to smile. Malvolio's smiles could be very fake too, since his smiles are not from his heart. He smiles for the mere sake of smiling as he thinks he would please his mistress this way. In fact, I do believe that Malvolio will smile rather horridly and exaggeratedly too, since he thinks that his mistress will like him even more. This adds on to the comic element in this scene as audience who see him smile will perhaps scoff at this fatuousness and silliness. The second scene that I think is amusing is Act 3 Scene 4. Smiling foolishly, as he fulfils his prophecy in the previous comic scene, Malvolio enters. ...read more.

is another evidence to show how engrossed and self-delusive Malvolio is. It is a real laughing stock to see how an used-to-be serious and sober man transmogrify himself into someone mushy and someone of a higher class - he throws in the fashionable word "sweet" and quotes fragments of popular and sophisticated sonnets, i.e., "Please one, and please all". Malvolio constantly hints to Olivia by quoting from the forged letter. It further shows how foolish he is since he even took the pains to memorise every single details of the whole letter. The fact that he follows things told in the letter makes him comical. Mainly because at this very moment, whilst he feels that he is merely following his paramour's fantasies, we, the audience are actually aware that he is just being manipulated by Maria, Sir Toby and Company, and is very much treated like an object. An object of ridicule, to be specific. In conclusion, I think that these two scenes are the funniest ones as they accentuate the foolishness and delusiveness of Malvolio, which marks the climax of the comedy scenes in the entire play. ...read more.