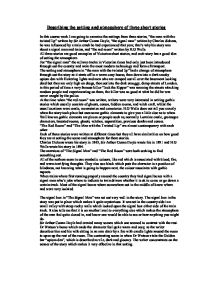 Describing the setting and atmosphere of three shortstories 'the man with the twisted lip', 'the signal man' and 'the red room'.

Describing the setting and atmosphere of three short stories In this course work I am going to examine the settings from three stories, "the man with the twisted lip" written by Sir Arthur Conan Doyle, "the signal man" written by Charles dickens, he was influenced by a train crash he had experienced that year, that's why his story was about a signal man and trains, and "the red room" written by H.G Wells. All three stories are good examples of Victorian short stories, and each story has a good idea of setting the atmosphere. For "the signal man" the railway tracks in Victorian times had only just been introduced through out the country and were the most modern technology and form of transport. The setting and atmosphere in "the man with the twisted lip" had a change of atmosphere through out the story as it starts off in a warm cosy house, then down into a dark smoky opium den with flickering lights and men who are camped out all over the basement looking dead but they are only high on drugs, then out into the dark smoggy, damp streets of London, in this period of time a very famous killer "Jack the Ripper" was roaming the streets attacking random people and experimenting on them, the killer was so good at what he did he was never caught by the police. ...read more.

"The Man with the Twisted Lip" creates tension by using mysterious settings, "Our own door flew open, and a lady, clad in some dark coloured stuff, with a black veil, entered the room". "Our own door flew open", suggests some kind of emergency or danger. "A lady, clad in some dark coloured stuff" suggests that a lady disguised and hidden away from any danger, as the dark colours represent evil its saying she is trying to scare away any possible danger, I liked the way the writer had described that because it really got me concentrated into the story and has built up tension the way he has described the appearance and actions of the character. That scene is very good as it describes a character changing the calm atmosphere into a dangerous, exciting atmosphere. The stairs that lead down to the opium den "golden bar" are worn and curved my constant use. In the den there are flickering red lights from opium pipes and moans and groans from people who have been smoking the opium, Arthur Doyle describes the opium addicts as slaves to there addictions, and not being able to remember how they got there, when they got there and where they are. There is a part which describes the atmosphere with thick heavy air, it helps me imagine I am there because the can just seen shadows of bodies through the thick smoke. ...read more.

The writer of "The Signal Man" is very clever how he creates the narrator to be a character. This course work I have taken part in has analysed three short Victorian stories, which where "the man with the twisted lip", "the signal man" and "the red room". Each story creates the setting, tension and atmosphere in there own ways which puts the readers in great suspense. From looking back the writer of "the man with the twisted lip" creates his atmosphere by contrasting scenes, one minute they are at Dr Watson's cosy relaxing house then they go to the opium den that is described on its appearance, "a long, low room, thick and heavy with brown opium smoke full of vile stupefying fumes". "The red room" creates tension and atmosphere by using gothic elements then putting the supernatural actions into a castle to spook the reader out. The writer from "the signal man" creates tension and setting and atmosphere by making one character that spends every day all day by closed in slimy rocky walls and making him think he is going make by making the bells vibrate and the other character "narrator" not being able to see it, also he makes the signal man see images of deaths that haven't happened yet and he ends up getting drawn in by these visions and ends up getting killed. That was very well done by the writer as he has shown that there was no escape from these visions and he was only going to end up getting drawn in and killed. ...read more.