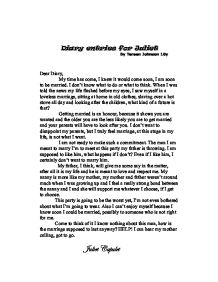 Diary entries for Juliet By Tereen Johnson 10y Dear Diary, My time has come, I knew it would come soon, I am soon to be married. I don't know what to do or what to think. When I was told the news my life flashed before my eyes, I saw myself in a loveless marriage, sitting at home in old clothes, slaving over a hot stove all day and looking after the children, what kind of a future is that? Getting married is an honour, because it shows you are wanted and the older you are the less likely you are to get married and your parents will have to look after you. I don't want to disappoint my parents, but I truly feel marriage, at this stage in my life, is not what I want. I am not ready to make such a commitment. The man I am meant to marry I'm to meet at this party my father is throwing. I am supposed to like him, what happens if I don't? Even if I like him, I certainly don't want to marry him. My father, I think, will give me some say in the matter, after all it is my life and he is meant to love and respect me. My nanny is more like my mother, my mother and father weren't around much when I was growing up and I feel a really strong bond between the nanny and I and she will support me whatever I choose, if I get to choose. This party is going to be the worst yet, I'm not even bothered about what I'm going to wear. ...read more.

Guilt, sorrowfulness, rage, isolation, all these and more I felt during a terrible row with my mother, father and my nanny, it is the worst set of feelings you could ever experience. My mom came in my bedroom and I was crying over Romeo, however my mother thought I was mourning Tybalt, I felt so guilty, because I should of being mourning him, I just couldn't help crying over Romeo. Mom and I were talking and I lead her to believe I hate Romeo for killing Tybalt and I got worked up and what I really meant was that I want to be with Romeo and eventually I will find him and we will be together, I was talking in code. My mom had no idea, she was totally oblivious to the fact I was crying over Romeo, not Tybalt. I told my mom I didn't want to marry Paris, I used Tybalt as an excuse, I said it's too soon after Tybalt's death, I know it was dishonest and you couldn't begin to even imagine the guilt I was feeling. My father flew off the handle when he found out I was refusing to marry Paris and that was all I needed. Rage filled my whole body and I started ranting and raving at him. He stated that if I didn't go ahead with the arranged marriage it would be as if I was never born, he would disown me, can you imagine your own father blanking you in the street? It brought me to tears, tears of anger. I should have told the truth, that I was already married, but either way he still would of acted the same. ...read more.

Hearing voices I went into panic mode and I wanted Juliet to come, I suggested she could live in a convent, what was I thinking? I ran, ran for my life and left Juliet behind. How could a leave a thirteen-year-old girl in such a place? How could I leave her surrounded by dead bodies? That would be distressing for anybody, let alone a young girl, it brings me to tears. Selfishness that what it was, I was trying to save my own skin and I hate myself for it. It is all my fault, maybe if I hadn't of married Romeo and Juliet, maybe if I didn't give Juliet that potion, maybe if I didn't encourage them, maybe if I just told the truth, maybe, maybe, maybe, if only I thought of all this before and maybe they wouldn't be dead. I deserve whatever is thrown at me. I have been false-hearted and deceitful and my soul will never be the same again. I'm not worthy of God's forgiveness. I'm a murderer, I left a thirteen-year-old girl to kill herself, for my own inexcusable, selfish reasons. I'm a vicar, someone you can trust, someone you can go to in your hour of need, well Romeo and Juliet done that and I messed up their lives, they are dead, dead, I can't get over it. Statues are being put up to honour the lives of the young lady and the young man, who fell in love despite their families hatred for each other and died showing their love for each other. Also the Capulets and the Montagues have made peace, the deaths of their precious Romeo and Juliet has reunited them. Their memory will live on forever RIP. Lawrence ...read more.