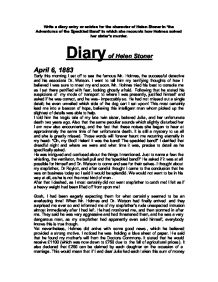 Write a diary entry or entries for the character of Helen Stoner in 'the Adventures of the Speckled Band' in which she recounts how Holmes solved her sister's murder. Diary of Helen Stoner April 6, 1883 Early this morning I set off to see the famous Mr. Holmes, the successful detective and his associate Dr. Watson. I went to tell him my terrifying thoughts of how I believed I was sure to meet my end soon. Mr. Holmes tried his best to console me as I sat there petrified with fear, looking ghostly afraid. Following that he stated his suspicions of my mode of transport to where I was presently, justified himself and asked if he was correct, and he was- impeccably so. He had not missed out a single detail; he even unveiled which side of the dog cart I sat upon! This most certainly lead me into a beacon of hope, believing this intelligent man whom picked up the slightest of details was able to help. I told him the tragic tale of my late twin sister, beloved Julia, and her unfortunate death two years ago. Also that the same peculiar sounds which slightly disturbed her I am now also encountering, and the fact that these noises she began to hear at approximately the same time of her unfortunate death. ...read more.

Lastly, how I had been moved from my previous room due to repairs intro Julia's old room, Holmes and Watson believed there was nothing to need repairing! In Dr. Roylott's room they found a safe with a saucer of milk on top of it and a lead lying in his room. We were all desperately baffled by these many strange things which I had never even thought about before; it was an utter mystery to us all. He came to the decision that he and Dr. Watson were to stay for the night in Julia's room; where I have been sleeping recently. When my stepfather had retired to his room, I would signal to them as they carefully watched from the village inn. Mr. Holmes and Dr. Watson would then come in and spend the night in my current room. Mr. Holmes has come to a conclusion as to what he believes happened to my sister that unforgettable night, but he has decided to presently keep his thoughts to himself until he has solid evidence and is absolutely certain of his current conclusion as to what happened that fateful night. I have been sitting here since 9pm awaiting my step father to retire to his chamber for the night and I will then signal. ...read more.

Also now I am the only person left in my family, since mother, sister and stepfather have all passed away. However; I can now go off into my blissful, delightful future marriage to Percy Armitage. Which I hope will be lovely for many years to come; also we will receive that extra money too. I am sure my stepfather would have been overjoyed if my death were to have occurred as he had planned, so justice has finally been served and Julia is finally at peace. Rest in peace my beloved. He finally got what he deserved. I am glad that my mind is finally at rest and all my questions answered. I now sit here thinking, if I were to have never gone to see Mr. Holmes and Dr. Watson who knows where I would be today- maybe not even here now presently writing this. I am forever and eternally in debt to that delightful duo, Mr. Holmes and Dr. Watson for their services, and what now seems their bravery also. Not only did they save me from my near death, but they also found the answers to my wonders and questions which have been pestering and worrying me for two years, only now do we know the tragic tale of the horrific mystery of which dear Julia met her fate. I wish Holmes and Watson well in their futures. I cannot thank them enough. God bless them both. ...read more.