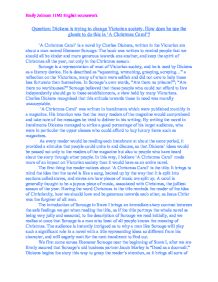 Dickens is trying to change Victorian society. How does he use the ghosts to do this in 'A Christmas Carol'?

Question: Dickens is trying to change Victorian society. How does he use the ghosts to do this in 'A Christmas Carol'? 'A Christmas Carol' is a novel by Charles Dickens, written in the Victorian era about a man named Ebenezer Scrooge. The book was written to remind people that we should all be kinder and more generous towards one another, and keep the spirit of Christmas all the year, not only in the Christmas season. Scrooge is a representation of most of Victorian society, and he is used by Dickens as a literary device. He is described as "squeezing, wrenching, grasping, scraping..." a reflection on the Victorians, many of whom were selfish and did not care to help those less fortunate than themselves. In Scrooge's own words, "Are there no prisons?"; "Are there no workhouses?" Scrooge believed that those people who could not afford to live independently should go to these establishments, a view held by many Victorians. Charles Dickens recognised that this attitude towards those in need was morally unacceptable. 'A Christmas Carol' was written in instalments which were published monthly in a magazine. His intention was that the many readers of the magazine would comprehend and take note of the messages he tried to deliver in his writing. By writing the novel in instalments Dickens managed to strike a good percentage of his target audience, who were in particular the upper classes who could afford to buy luxury items such as magazines. As every reader would be reading each instalment at about the same period, it provided a stimulus that people could unite in and discuss, so that Dickens' ideas would be passed not only to the readers of the magazine but also to people who have heard about the story through other people. In this way, I believe 'A Christmas Carol' made more of an impact on Victorian society than it would have as an entire novel. The first thing the reader notices about 'A Christmas Carol' is the title. ...read more.

The Spirit also takes Scrooge to a previous Christmas, where he is portrayed as somebody very much adored. Dickens does this to remind Scrooge how wonderful it is to feel loved and needed. He is then transported to his old workplace, where he notes how generous and kind his employer Fezziwig is. Fezziwig is a literary device, used to show Scrooge that giving other people just a little can give so much happiness. "He has the power to render us happy or unhappy, to make our service light or burdensome, a pleasure or a toil...the happiness he gives is quite as great as if it cost a fortune." Scrooge is made to realise that as an employer he has this responsibility, and realises how much of a toil he must make working for Bob Cratchit. Scrooge is then taken to a scene between himself and his ex-fianc�. She is telling him that she wishes to cancel their engagement due to his greed and his altered nature. The meeting reminds Scrooge how much he actually lost when he gave in to "Gain", in turn showing the reader what they could lose if they were to behave in the same way, also giving them time to reflect what they may have lost to Gain in the past. The last shadow of the past Scrooge witnesses is the life that he may have led if he had not been so greedy and had married Belle. The scene is a joyful Christmas at home with Belle and her family, "the joy and gratitude and ecstasy," in contrast to Scrooge's mean and solitary Christmas we had seen at the beginning of Stave I, showing Victorian society that happiness comes from family life and keeping good company, as opposed to the misery of being alone. The Ghost of Christmas Present is the next to appear to Scrooge. It comes in the form of a "jolly giant" surrounded by all manner of Christmas delicacies. ...read more.

Although it takes Scrooge some time to muster the courage to do so, he eventually joins his nephew for Christmas dinner. And true to his own fixed purpose, Fred welcomes his uncle in with sincere kindness. Scrooge would no longer abstain from the Christmas merrymaking, he pledges to rejoin it, just as he is rejoining society, going through life with his fellow travellers toward death, as Fred says in Stave I. In a concluding statement, the narrator tells that Scrooge "was better than his word." The announcement reminds readers of the first paragraph of the book, in which we learn that Scrooge's name "was good upon the 'Change (the London Exchange) for anything he chose to put his hand to." Whether as a tight-fisted miser or as a reformed man of generous spirit, then, Scrooge's word can be trusted. We have no reason to hesitate that he will follow through on his pledge to live a better life. Scrooge even becomes a second father to Tiny Tim-who, as the narrator emphasises, "did NOT die." We see in Stave I that Dickens specifies the genre of the novel by writing "Once upon a time," however Dickens' fairy tale is not one to be forgotten when put down. Instead, he intended his readers to reconsider their own lives, and see if they could make the same sorts of changes that Scrooge did, not only in Victorian Society, but for as long into the future as "A Christmas Carol" is read. A pun on ghostly spirits and alcoholic spirits informs readers that Scrooge "had no further intercourse with Spirits, but lived upon the Total Abstinence Principle." As teetotallers refrain from all alcohol, so did Scrooge abstain from further ghostly emissaries? For the Ghost's mission had been accomplished: Scrooge keeps Christmas, and he keeps it well. "May that be truly said of us, and all of us! And so, as Tiny Tim observed, God Bless Us, Every One!" ?? ?? ?? ?? Emily Johnson 11M1 English coursework ...read more.