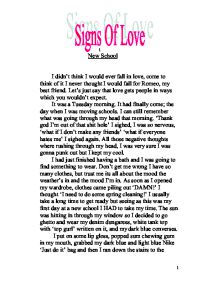 didn't think I would ever fall in love, come to think of it I never thought I would fall for Romeo, my best friend. Let's just say that love gets people in ways which you wouldn't expect.

1 New School I didn't think I would ever fall in love, come to think of it I never thought I would fall for Romeo, my best friend. Let's just say that love gets people in ways which you wouldn't expect. It was a Tuesday morning. It had finally come; the day when I was moving schools. I can still remember what was going through my head that morning. 'Thank god I'm out of that shit hole' I sighed, I was so nervous, 'what if I don't make any friends' 'what if everyone hates me' I sighed again. All those negative thoughts where rushing through my head, I was very sure I was gonna punk out but I kept my cool. I had just finished having a bath and I was going to find something to wear. Don't get me wrong I have so many clothes, but trust me its all about the mood the weather's in and the mood I'm in. As soon as I opened my wardrobe, clothes came piling out 'DAMN!' I thought 'I need to do some spring cleaning!' I usually take a long time to get ready but seeing as this was my first day at a new school I HAD to take my time. The sun was hitting in through my window so I decided to go ghetto and wear my denim dungarees, white tank top with 'top gurl' written on it, and my dark blue converses. I put on some lip gloss, popped sum chewing gum in my mouth, grabbed my dark blue and light blue Nike 'Just do it' bag and then I ran down the stairs to the kitchen, to find a note on the counter, it was from mum; Honey I have gone to work. 'Well duh' I thought. Ten pounds is in the draw. P.s/make sure you're not late. I scrunched up the note and threw it in the bin. ...read more.

I guess world just isn't fair" I was completely upset by now. "Khia why are you letting Kerisha get to you, your just letting her win, as I said she's just a hater, and I mean she just hating because your beautiful and she thinks you've got me and trust me you would have me if we didn't have such a close friendship' he put his arm around me comforting me "and don't worry you might even get away with not seeing her all this summer" he said reassuring me. "I don't know about that, but I'm gonna try and forget about this" I said reassured. "Cool drink up before it gets cold" he said passing me a mug of hot coco, I sipped it slowly, it was still very hot. I was so glad that I had let everything out; telling Romeo about my insecurity. "Thanks" I said to him "For what?" he asked "For being here for me, you know" "Aaahhh man that's all right that's what friends are for" with that he winked at me. Romeo's point of view. I had never seen Khia that upset before and it was all because of that bitch Kerisha, why did she have to act like that? I didn't even want her, I felt like telling her to back off but I also wanted to respect Khia's wishes so that's what I did. End. "So you don't like Kerisha then?" I asked "Nah, I don't want a bitch as a wifey you know?" "Yea" "When I do find a wifey you will be the first to know" he smiled at me I smiled back at him "Joker" "How about you, you got anyone in mind?" Romeo asked "Nah" I replied, I started drinking my hot chocolate. "Well then Dre likes you" he said smiling at me "Well how you know that?" I asked "Well he is my boy, he told me today" "He did?" I asked "Yes man, so what do think of him?" ...read more.

'Please' I pleaded. 'Well...he was tall, dark and handsome' she smiled 'I couldn't believe he choose me because they were so many girls after him' I nodded 'anyway he was smart intelligent caring and sincere' my mother had tears in her eyes and so did I. 'Even though he came from a poor background he always did the right thing, he wanted to make it and he did, he got a scholarship to university and that's where we met, he was nothing like the people he hung around with, he was different and when I realised that I feel in love and from then it was the two of us against the world. We never did get a chance to get married, we was going to but then I got pregnant with you and when you came into the world' she held my hands 'it was the best day of our lives' a tear dropped onto our hands 'he loved you so much, you never wanted to leave his side, you were daddy's little girl. We did decide to get married when you were one years old but he started to get sick real sick' she sniffed 'No one knew what was wrong with him, they ran more tests and then he was diagnosed with liver cancer, he had lost so much weight and had lost his appetite and he was in so much pain, he was deteriating in front of my eyes. The doctors said it was too late to cure the tumour because it was too big' we were both crying 'I still wanted to get married, do you know what he told me he told me that he didn't want me to be a widow. Khia I want you to know that he loved you so much he did' 'I wish I could remember him mum' She held my face 'It's not your fault' 'I know' I said 'You loved him a lot didn't you' 'Yeah I did, I still do' We cried together for what seemed like a long time. ?? ?? ?? ?? 1 ...read more.