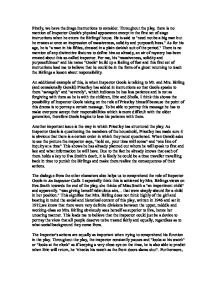 Directors notes and stage instructions for An Inspector Calls

Firstly, we have the Stage Instructions to consider. Throughout the play, there is no mention of Inspector Goole's physical appearance except in the first set of stage instructions when he enters the Birlings' house. He is said to "need not be a big man but he creates at once an impression of massiveness, solidity and purposefulness." As for his age, he is "a man in his fifties, dressed in a plain darkish suit of the period." There is no mention of any distinctive features to define him so already, an air of mystery has been created about this so-called inspector. For me, his "massiveness, solidity and purposefulness" and his name "Goole" build up a feeling of fear and this first set of instructions lead me to believe that he could be in the form of a ghost returning to teach the Birlings a lesson about responsibility. An additional example of this, is when Inspector Goole is talking to Mr. and Mrs. Birling (and occasionally Gerald) Priestley has added in instructions so that Goole speaks to them "savagely" and "severely", which indicates he has less patience and is not as forgiving with them as he is with the children, Eric and Sheila. I think this shows the possibility of Inspector Goole taking on the role of Priestley himself because the point of this drama is to portray a certain message. To be able to portray this message he has to make everyone accept their responsibilities which is more difficult with the older generation, therefore Goole begins to lose his patience with them. Another important issue is the way in which Priestley has structured the play. As Inspector Goole is questioning the members of the household, Priestley has made sure it is obvious that there is a certain order in which they must questioned. When Gerald asks to see the picture the inspector says, "hold on, your time will come" and "one line of inquiry at a time" This shows he has already planned out whom he will speak to first and last and what information he will have. ...read more.

This shocks Eric as he has had quite enough of the Inspectors investigation, in addition with the amount he has drunk and the fact that he has been excluded from seeing the photograph making him and the audience think that he is nothing to do with this girl and her death. So the use of the photograph in the Inspectors investigation has aided in the remembrance of the girl, added to the tension with the excluding of some characters from seeing the photograph, resulting in anger, an outburst of tears and upset from Sheila and an added atmosphere of unease when Eric is told he is need ed in the investigation even though he has not been allowed to see the photograph. Towards the end of the play, when Mrs Birling enters to see what is going on he admits that Inspector: 'No it wasn't necessary. And I thought it better not to' When talking about the showing of the photograph to Gerald, yet insists that Mrs Birling must see the photograph. Mrs Birling: 'You have a photograph of this girl?' Inspector: 'Yes. I think you'd better look at it.' Mrs Birling: 'I don't see any particular reason why I should-' Inspector: 'Probably not. But you'd better look at it' This adds to the tension and makes the audience think that not only is Mr Birling, Sheila and Gerald involved in this girls life but maybe Mrs Birling is too. At first Mrs Birling denies knowing the girl and the Inspector accuses her of lying, causing an uprising of anger from Mr Birling that the Inspector should insult his wife in such a way. Inspector: 'Your not telling the truth.' Mrs Birling: 'I beg your pardon!' Birling: (angrily to Inspector) 'Look here, I'm not going to have this, Inspector. You'll apologise at once.' The use of the photograph is a clever one, it aids Mr and Mrs Birling in remembering the girl, creates tension and anger between characters that aren't allowed to see the ...read more.

The Inspector tries to account for his knowledge through items found in Eva Smiths room a diary and some letters. " I had an idea it might be - from something the girl herself wrote" " She kept a rough sort of diary. And she said there that she had to go away...She felt there'd never be anything as good again for her." The inspector's method of speech is so contradictory to the hyperbole spoken so confidently by Mr. Birling that he feels threatened by the inspectors ability to undermine his authority, "Could I have a drink first," "No," "Yes," "Alright go then." J.B Priestley was well known for his ability to incorporate time in his plays. An Inspector Calls creates a real and believable sense of safety for the audience and collapses that gradually as the inspector develops. Throughout his life Priestley was interested in the theories of Jung and Ouspensky; this would tell us that he believed a policeman in our dreams usually signifies our conscience. The inspector has an aura of mystery that allows him to have a sharp penetrating quality gained by his inner knowledge. As the play develops the audience begin to feel that it is a slight coincidence the whole family being caught up in one girl. At the end they find out that the inspector was a fake but what it showed was that their individual actions were wrong and their actions and attitudes hurt people. In the end, like at the start of the play priestly highlights the Birlings attitudes. He moves the play into a new direction because we now know that the whole play was about showing the Birlings that their actions hurt people and their attitudes are also wrong. Also the ending showed the audience what would happen if your actions were selfish and were just about yourself. I was a warning that if you acted like the birlings bad things would happen to other people. The inspector is a dramatic device The inspector interests the audience by being mysterious; he carries an air of authority about him. ...read more.