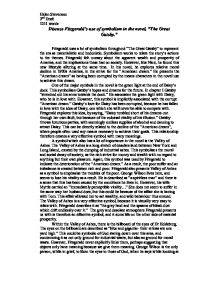 Discuss Fitzgerald's use of symbolism in the novel, &quot;The Great Gatsby.&quot;

Discuss Fitzgerald's use of symbolism in the novel, "The Great Gatsby." Fitzgerald uses a lot of symbolism throughout "The Great Gatsby" to represent the era as materialistic and hedonistic. Symbolism works to relate the story's actions to the themes. Fitzgerald felt uneasy about the apparent wealth and prosperity of America, and the implications these had on society. However, like Nick, he found this new lifestyle alluring at the same time. In his novel, he explores relative moral decline in 1920s America, in the strive for the "American dream." He presents the "American dream" as having been corrupted by the means characters in the novel use to achieve this dream. One of the major symbols in the novel is the green light at the end of Daisy's dock. This symbolises Gatsby's hopes and dreams for the future. In chapter I Gatsby "stretched out his arms towards the dock." He associates the green light with Daisy, who he is in love with. However, this symbol is implicitly associated with the corrupt "American dream." Gatsby's love for Daisy has been corrupted, because he has fallen in love with the idea of Daisy, one which she will never be able to compete with. Fitzgerald explores this idea, by saying, "Daisy tumbled short of his dreams-not through her own fault, but because of the colossal vitality of his illusion." ...read more.

The eyes on the billboard are described as "blue and gigantic- their retinas are one yard high." This could be symbolic of God staring down over this area, and condemning it as not only ground for industrial waste, but also as ground for moral waste. However, Fitzgerald never explicitly links them, perhaps suggesting that objects only have meaning because we give them meaning. George Wilson is the only person, while in grief, to liken the eyes to those of God, when he says while looking at the billboard, "God sees everything." The eyes are an important symbol, because they show how characters in the novel instil objects with meaning, almost as if a vindication to prove what they are doing is right. George Wilson seeks revenge for his wife's death, and the eyes of Dr Eckleburg provide him with the vindication that he is upholding moral values. The almost careless decadence of this era is symbolised by cars. There are many references to cars throughout the novel. They symbolise wealth, and also how money, like a car can insulate its owners. Cars symbolise the carelessness of many of the characters wealth throughout the novel. For example, Owl Eyes crashes his car, and then remarks, "I know very little about driving." ...read more.

Nick says, "His [Tom's] family were immensely rich..." West Egg therefore represents new wealth and prosperity, and Gatsby lives here. West Egg is also associated with ostentatious wealth, and is described as "the less fashionable of the two." As mentioned before, the Valley of Ashes represents social decay, and an imbalance between rich and poor. It is described as "grey land" and is very desolate. New York is then presented as the place where this money is accumulated, and therefore is presented as the cause of this social decay. Geography is an important symbol in the novel, and it is very effective, because it gives the social standing of characters, just from where they live. It is also an important symbol, because it highlights the differences between the social classes, which would have been an important theme in the 1920s. In conclusion, Fitzgerald's use of symbolism in the novel is very effective. He uses his symbols to implicitly steer the reader's attention to the point he is trying to make. The main themes of "The Great Gatsby" are the degradation of the "American dream" and the relative hollowness of the upper classes. Fitzgerald uses symbolism in the novel very effectively to explore these themes, and to highlight his apprehension about the materialist wealth and almost amorality, at a time when America could foresee no trouble in its future. ?? ?? ?? ?? Helen Stevenson 2nd Draft 1211 words ...read more.