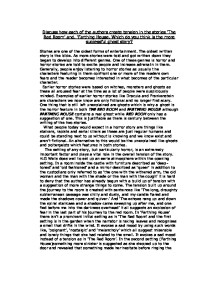 Discuss how each of the authors create tension in the stories &amp;#145;The Red Room&amp;#146; and, &amp;#145;Farthing House. Which do you think is the more successful ghost story?

Discuss how each of the authors create tension in the stories 'The Red Room' and, 'Farthing House. Which do you think is the more successful ghost story? Stories are one of the oldest forms of entertainment. The oldest written story is the bible. As more stories were told and got written down they began to develop into different genres. One of these genres is horror and horror stories are told to excite people and increase adrenalin in them. Generally, people enjoy listening to horror stories as usually the characters featuring in them confront one or more of the readers own fears and the reader becomes interested in what becomes of the particular character. Earlier horror stories were based on witches, monsters and ghosts as these all aroused fear at the time as a lot of people were suspiciously minded. Examples of earlier horror stories like Dracula and Frankenstein are characters we now know are only fictional and no longer find scary. One thing that is still left unexplained are ghosts which is why a ghost is the horror feature in both THE RED ROOM and FARTHING HOUSE although FARTHING HOUSE contains a real ghost while RED ROOM only has a suggestion of one. This is justifiable as there is century between the writing of the two stories. What people today would expect in a horror story are things like stalkers, rapists and serial killers as these are just regular humans and could be standing next to us without is knowing and we know exist and aren't fictional. ...read more.

This helps the tension because you see the events through his eyes. Know what he is feeling and following every movement of his ordeal. He also sets up an expectation of his downfall and the terror he will face by saying, 'I can assure you, that it will take a very tangible ghost to frighten me.' The old people add to the tension with the warnings and hints that something will happen by saying, 'It's your own choosing' and 'This night of all nights'. In 'Farthing House' the tension is built differently. At the start of the story tension is created straight away by saying ,'I have never told you any of this before-I have never told anyone, and indeed, writing it and sealing it up in an envelope to be read at some future date may still not count as telling. But I shall feel better for it'. In saying this, the narrator, who is also the main character, has set up an interesting story to come, thus building tension. She seems to be the only character in the story that actually creates any tension where as in 'The Red Room' four characters play vital roles in building up the tension in the beginning of the story. In 'The Red Room' the tension rises as the narrator draws nearer to the room and just before he enters it he feels the need to clutch his revolver as if expecting something sinister to be around the corner. ...read more.

The conclusion then brings understanding, completion and sympathy for the sympathy for the woman because of the concluding sentence, 'But I imagine she has gone, now that she has what she was looking for. The conclusion of the stories are both very different from each other as one is very clear and the other takes a bit of thought to understand but when you do it explains the story as does the other. For example 'There is fear in that room of hers - black Fear, and there will be- so long as this house of sin endures.' This suggests that there was no ghost in the room at all and was only haunted by the fear. The final sentence in 'Farthing House' is 'But I imagine that she has gone, now that she has what she was looking for. This ending concludes the story on a happy note and explains that the lady wandering and sobbing in the house was sobbing and wandering because she was looking for her baby. The main differences between the two stories apart from the centuries in which they were written are that 'Farthing House' contains a real ghost where as 'The Red Room' only has a suggestion of one, the tension built in 'The Red Room' is much more obvious and more effective in my opinion than in the other story and there are more prominent characters in 'The Red Room' which is why I have come to the conclusion that 'The Red Room' is a much more successful horror story than 'Farthing House'. ...read more.