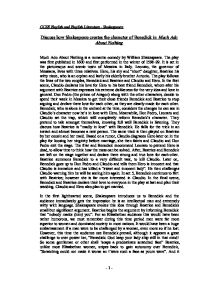 GCSE English and English Literature- Shakespeare Discuss how Shakespeare creates the character of Benedick in Much Ado About Nothing Much Ado About Nothing is a romantic comedy by William Shakespeare. The play was first published in 1600 and first performed in the winter of 1598-99. It is set in the picturesque and scenic town of Messina in Italy. Leonato, the governor of Messiana, lives with three relatives. Hero, his shy and "short" daughter, Beatrice his witty niece, who is an orphan and lastly his elderly brother Antonio. The play follows the lives of the two couples, Benedick and Beatrice and Claudio and Hero. In the first scene, Claudio declares his love for Hero to his best friend Benedick, whom after his argument with Beatrice expresses his extreme dislikeness for the very idea and love in general. Don Pedro (the prince of Aragon) along with the other characters, decide to spend their week in Messina to get their close friends Benedick and Beatrice to stop arguing and declare there love for each other, as they are clearly made for each other. Benedick, who is alone in the orchard at the time, considers the changes he can see in Claudio's character now he's in love with Hero. Meanwhile, Don Pedro, Leonato and Claudio set the trap, which will completely reform Benedick's character. They pretend to talk amongst themselves, knowing full well Benedick is listening. They discuss how Beatrice is "madly in love" with Benedick. He falls for the trick in an instant and almost becomes a new person. The same trick is then played on Beatrice by her cousin and her maid. Based on a rumor, Claudio disgraces Hero later on in the play for loosing her virginity before marriage, she then faints and Claudio and Don Pedro exit the stage. The friar and Benedick recommend Leonato to pretend Hero is dead, to allow time to think how the mess can be solved. ...read more.

By using of these terms Benedick is making his philosophy clear to the audience. Love changes men/soldiers from strong, powerful and tough, into fools, the lowest form of life and poetic, everything a man in his opinion shouldn't be. His entire tirade against love does support his opinions clearly and the scene before the trick concludes his thoughts. The trick is then played on him by Don Pedro, Claudio and Leonarto, and his opinion changes so suddenly, that the audience is both stunned and amused. Shakespeare has used the love song to emphasise how quickly Benedick has changed. He is now a transformed character. He thinks its "no trick" because "the conference was sadly borne" and its clear at this point that the trick has worked. Its here when all of his opinions are explained and. The audience can tell he didn't hate Beatrice; he has an outburst of emotion overwhelm which suggests he has kept his thoughts in for so long he can't hold it in any longer. The whole bickering episode in the earlier scenes was clearly unmeant This idea is developed form the term "horribly in love". He then realises some aspects of his perfect women he mentioned earlier can be found in Beatrice. " fair...virtuous...wise...witty" , these characteristics can be found in Benedicks character which is why the audience knew they were made for each other in the beginning, just a few lines ago, nobody met his standards. He also puts a woman before himself for a change and admits his not better than Beatrice, she is "wise" but not" for loving" him. For the first time he is not trying to make himself superior and is noticing faults in himself. Another feature of change in his character is his opinion on Hero, in the first scene he mentioned how he did "not like her" now his expressing how trustworthy she is "They have the truth of this from Hero". ...read more.

For the first time in the play, Benedick declares his love for Beatrice in front of other characters," Do not you love?". Benedick clearly understands the consequences of displaying his affection in front of Claudio, as he for so long was adamant he would never marry. He is risking looking extremely foolish; clearly Beatrice is far more important than Benedick reputation. Benedict for the duration of the play has been putting off telling Beatrice because of this, but he no longer cares. This clearly gives Benedick more confidence as he then persuades Don Pedro to "get (thee) a wife". In the first scene, the audience encountered Benedick persuading Claudio to remain a bachelor, as it makes a man weak and foolish. Now his doing the complete opposite and is encouraging love and marriage, and even taking on the role himself. This change is beyond dramatic and it's almost impossible to think someone could change their views this quickly and strongly. Some of his opinions may have changed but, his wit is still visible Maybe Shakespeare kept this aspect of character because it was Benedick's main attraction, the audience, and without it we wouldn't be drawn to him anymore and the play would become tedious and lifeless. The audience has learnt how love can instantly change an individual. Shakespeare achieves this successfully through the sudden dramatic changes in Benedick's character. He does this in three stages. In the opening act, Shakespeare introduces us to the original, as we know it Benedick. In act three scene three, the most vital and key changes are made in Benedick's character, which almost completely contradict what he formerly thought about love and Beatrice. They are far more positive; however, Benedick still uses witty language up till the end of the play to make himself appear more intelligent. He also uses excuses to make him look less foolish. By the end, apart from his wit, we see hardly any more aspects of his past character remaining. His far more caring and concerned for Beatrice compared to his original selfish and witty attitude. ?? ?? ?? ?? - 1 - ...read more.