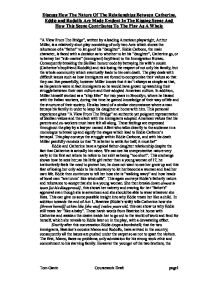 Discuss How The Nature Of The Relationships Between Catherine, Eddie and Rodolfo Are Made Evident In The Kissing Scene And How This Scene Contributes To The Play As A Whole

"A View From The Bridge", written by a leading American playwright, Arthur Miller, is a relatively short play consisting of only two Acts which shows the reluctance of a "father" to let go of his "daughter". Eddie Carbone, the main character, is faced with a decision as to whether to let his "daughter", Catherine go, or to betray her "sub-marine" (immigrant) boyfriend to the Immigration Bureau. Consequently breaking the Sicilian honour code by betraying his wife's cousin (Catherine's boyfriend Rodolfo) and risk losing the respect of not only his family, but the whole community which eventually leads to his own death. The play deals with difficult issues such as how immigrants are forced to compromise their values so that they can live peacefully, however Miller knows that it isn't always as simple as that, as his parents were in fact immigrants so he would have grown up watching their struggle between their own culture and their adopted American culture. In addition, Miller himself worked as a "ship lifter" for two years in Brooklyn, where he liaised with the Italian workers, during this time he gained knowledge of their way of life and the structure of their society. He also heard of a similar circumstance where a man betrays his family in order to keep his daughter at home with him. This personal experience gives "A View From The Bridge" an authentic yet poignant representation of Sicilian values and the clash with the immigrants adopted American values that his parents and co-workers must have felt all along. ...read more.

This all adds to the tension of the play and makes the ending more intense and surprising. At the end of Act 1 tension is building within the family and we all know that this will all come to a climax and this scene is the calm before the storm; it is the build up that prepares us for the kissing scene which occurs at the beginning of Act 2. At the time, all of the Eddie's feelings are being expressed to Catherine, Alferi or Beatrice and this is all happening "behind closed doors". However, in this scene Eddie's feelings towards Rodolfo become apparent to Marco. It begins with Eddie talking about respect, directing most of this at Rodolfo after he said that America is more "free". Eddie sees this as an opportunity to character assassinate Rodolfo and belittle him in front of everyone. He begins to say how in Italy you wouldn't just "drag off some girl without permission", Rodolfo senses the bitterness in Eddie's tone and immediately starts to argue how he does have "respect for her", yet at this point Marco is quick to tell Rodolfo to "come home early" which shows how they respect Eddie and don't quite understand the true root of Eddie's uneasiness. Yet Eddie is not content with embarrassing Rodolfo in front of Catherine to that extent, he then tries to push it further by stating that the dock is "no place for him". However when he realises that Rodolfo and Catherine stop dancing to listen to what he has to say he realises that he has gone too ...read more.

experience dramatic irony in that they know that it cant work out as they had desired, they know that Eddie will betray his family and that there is nothing they can do about it which induces frustration which also adds to the play. Miller used other techniques to help bring tension and a shock element into "A View From The Bridge". Miller inserted some socially unacceptable elements to the play such as suggested homosexuality, which would shock and disturb some viewers as plays at that time were more conservative. In addition he also hinted that the relationship between Catherine and Eddie may be more than a father-daughter relationship; that it is in fact romantic and therefore that Catherine has an Electra complex. An Electra complex is where a father and daughter have an unnaturally close relationship which eventually grows and leads to sexual relations. This is hinted at near the end of the play when Beatrice exclaims "you can never have her". Moreover "the kissing scene" also suggests this theory as Eddie kisses Catherine on her mouth which is traditionally sign of affection between those in a relationship. These techniques are used to shock and grip the audience. It is small details like this that make the play what it is; a play with intricate and complicated relationships which develop and lead to deportation, death and romance. ?? ?? ?? ?? Discuss How The Nature Of The Relationships Between Catherine, Eddie and Rodolfo Are Made Evident In The Kissing Scene And How This Scene Contributes To The Play As A Whole Tom Gavin Coursework Draft page1 ...read more.