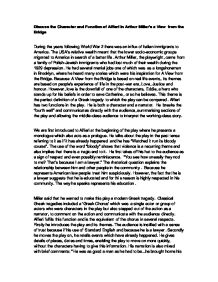 Discuss the Character and Function of Alfieri in Arthur Miller's a View from the Bridge During the years following World War 2 there was an influx of Italian immigrants to America. The USA's relative wealth meant that the lower socio-economic groups migrated to America in search of a better life. Arthur Miller, the playwright, came from a family of Polish-Jewish immigrants who had lost much of their wealth during the 1929 depression. He had several menial jobs one of which was as a longshoreman in Brooklyn, where he heard many stories which were his inspiration for A View from the Bridge. Because A View from the Bridge is based on real life events, its themes are based on people's experience of life in the post-war era, Love, Justice and honour. However, love is the downfall of one of the characters, Eddie, a hero who stands up for his beliefs in order to save Catherine, or so he believes. This theme is the perfect definition of a Greek tragedy to which the play can be compared. Alfieri has two functions in the play. He is both a character and a narrator. He breaks the 'fourth wall" and communicates directly with the audience, summarising sections of the play and allowing the middle-class audience to interpret the working-class story. We are first introduced to Alfieri at the beginning of the play where he presents a monologue which also acts as a prologue. ...read more.

This intimate understanding of what is going on allows him to bridge a communication gap between the middle-class audience and working-class characters, enabling the audience to form an understanding of the story and the emotions that the characters are feeling. Fate is one of a series of inevitable or predetermined events, for example in the play Eddie's ultimate fate is to die, this is clear from the beginning. We also know that because of the fate of Eddie Alfieri is powerless to stop the tragedy. We know this when he says "As powerless as I", Alfieri cannot control fate, however he can alleviate suffering. In Alfieri's opening monologue Alfieri expresses the idea that tragedy is timeless: "in some Caesar's year, in Calabria perhaps or on the cliff of Syracuse, another lawyer." The use of the name "Caesar" an ancient emperor shows the idea that humans don't change, a Tragedy is timeless and can apply to an Ancient era, and it harks back to the Greek theme. Although Alfieri is an immigrant he is an educated man. This is shown in his speech as he speaks in Received Pronunciation in comparison to Eddie who speaks in American dialect, "You was gonna", which also shows his lack of education. As a consequence of his education, people in his community respect him and recognise him as a figure of authority. ...read more.

Although Miller understands that law only represents what is morally right, he believes sometimes it is better to "settle for half", a recurring point in the play. If someone feels the need to seek revenge then the desire to do so must be driven by what they believe is just. However the justice system only says what it is morally right to do and not what should be just and fair. By settling for half a compromise is achieved and as close to just as can be achieved is achieved. Alfieri's function is to explain the play as it happens, explaining a working class scenario to a middle-class audience. The title of the play is a metaphor for what Alfieri does: He acts as "a view from a bridge" in several aspects, both in and out of the play fulfilling his function as a Greek Chorus. In the play he bridges two different culture's justice systems creating a compromise between Italian tribal justice and American law. Alfieri out of the play explains the significance of the play and his emotional response to Eddie, acting as the mouthpiece to Miller. He is the bridge between American values and traditional customs. He has loyalties towards both and represents the difficulties of trying to reconcile the two cultures. He is a metaphor for Brooklyn Bridge, connecting the ethnic communities of Brooklyn to wealthy Manhattan.In effect Alfieri is an incarnation of Miller reacting in the way Miller would act. A view from a Bridge is Miller's emotional response to a very real story. ...read more.