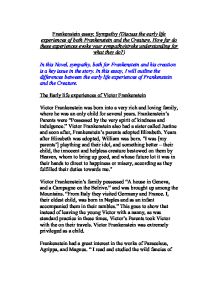 Discuss the early life experiences of both Frankenstein and the Creature. How far do these experiences evoke your sympathy/stroke understanding for what they do?

"No Human being could have passed a happier childhood than myself."The opposite is true about the creature. The early life experiences of the Creature The Creature was 'born' as a result of Victor Frankenstein's quest to create a being that couldn't die. Frankenstein had left the Creature, and had gone to bed, but the Creature came to visit Victor Frankenstein in the night. "I beheld the wretch, the miserable monster which I had created." The creature was so large and physically revolting that when it was 'born' Frankenstein was terrified and fled. "Breathless horror and disgust filled my heart." The Creature first has contact with Humans when He is thrown out of a town. "The whole village was roused; some fled, some attacked me, until, grievously bruised by stones and many other kinds of missile weapons, I escaped to the open country." The Creature wanders the woods, freezing cold until He finds a fire. The Creature was intrigued by it's warmth and "thrust [His] hand into the live embers." The creature learns to talk by eavesdropping on the De Laceys and talks to De Lacey, who is Blind. "I knocked. "Who is there?" said the old man-"Come in" I entered; "Pardon this intrusion," said I "I am a traveller in want of a little rest; you would greatly oblige me if you would allow to remain a few minutes before the fire." ...read more.

He does not consider the implications of his dangerous experiments or believe that anything could possibly go wrong, his intentions he believed were good. Horrified at his failure and unable to accept what has happened he runs away from the problem, he is too vain to admit that what he has done is wrong."- Andrew Prothero. I definitely feel more sympathy for the Creature, who has a desolate, lonely life. His crimes are forgivable, for he wasn't educated in moral values. His actions were the result of extreme poverty and deprivation and ill- parenting. "The creature does not show his evil side until he has won the sympathy of the reader from his constant rejection and desperate need for love, he is shown to be highly intelligent and extremely sensitive to the feelings of the people that he has observed." - Andrew Prothero I think this is how Shelley wanted us to feel. The early life experiences of the Creature and Frankenstein couldn't be more different. " The 'perfect' baby is not just the product of its genes. It's more the result of good nutrition, education, healthcare - and love" - Robert Winston Chris Hatchett. Words- 1,621 ...read more.