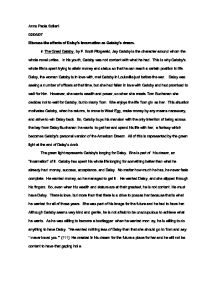 Discuss the effects of Daisy's incarnation as Gatsby's dream.

Anna Paola Soliani 02/05/07 Discuss the effects of Daisy's incarnation as Gatsby's dream. In The Great Gatsby, by F. Scott Fitzgerald, Jay Gatsby is the character around whom the whole novel unties. In his youth, Gatsby was not content with what he had. This is why Gatsby's whole life is spent trying to attain money and status so that he can reach a certain position in life. Daisy, the woman Gatsby is in love with, met Gatsby in Louisville just before the war. Daisy was seeing a number of officers at that time, but she had fallen in love with Gatsby and had promised to wait for him. However, she wants wealth and power, so when she meets Tom Buchanan she decides not to wait for Gatsby, but to marry Tom. She enjoys the life Tom gives her. This situation motivates Gatsby, when he returns, to move to West Egg, make money by any means necessary, and strive to win Daisy back. So, Gatsby buys his mansion with the only intention of being across the bay from Daisy Buchanan: he wants to get her and spend his life with her, a fantasy which becomes Gatsby's personal version of the American Dream. ...read more.

'She'll see.'" (117) The green light is the vision of Gatsby's goal. In a world where Gatsby is powerful because he could essentially obtain anything with his money, Daisy is a challenge to him, because she could not be purchased. When, at last, Gatsby believes that Daisy is his, he no longer idolizes her. Now that he realizes he has her, she is no longer desirable. At first, the green light seemed very near. The green light was physically close to him but he thought he could never actually have it, meaning Daisy. Money could be viewed in the same sense. As soon as Gatsby realizes it, it was again a normal green light on a dock. Therefore, the green light has no more meaning to him and neither does Daisy. In fact, Daisy had said to Gatsby that she would have called, but "Gatsby himself didn't believe it ... and perhaps he no longer cared. If that was true he must have felt that he had lost the old warm world, paid a high price for living too long with a single dream." ...read more.

He did not know that it was already behind him, somewhere back in the vast obscurity... Gatsby believed in the green light." (182) Gatsby's life is a failure because he doesn't achieve what he wants. Gatsby lacked the insight to understand what was happening. In fact, Gatsby says it himself: "'Can't repeat the past? Why of course you can!'" (111) He had never truly seen either Daisy or himself, so blinded he was by his dream. His coldly methodical five-year plan to restore the past would end up as useless as one of the used up matches that Daisy flung so carelessly after lighting a cigarette. In Chapter VII, Nick remembers that it is his thirtieth birthday. He, like Gatsby, Tom, and Daisy, came East to get away from his past; now that his youth is officially over, he realizes that he may have made a mistake to come East, and begins a period of reevaluation that leads to his eventual decision to return to the Middle West. The Great Gatsby is the story of Nick's initiation into life. His trip East gives him the education he needs to grow up. Nick, in a sense, writes The Great Gatsby to show us what he has learned. . ...read more.