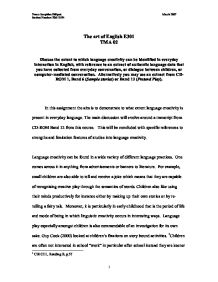 Discuss the extent to which language creativity can be identified in everyday interaction in English, with reference to an extract of authentic language data that you have collected from everyday conversation, or dialogue between children, or computer-med

The art of English E301 TMA 02 Discuss the extent to which language creativity can be identified in everyday interaction in English, with reference to an extract of authentic language data that you have collected from everyday conversation, or dialogue between children, or computer-mediated conversation. Alternatively you may use an extract from CD-ROM 1, Band 6 (Sample stories) or Band 12 (Pretend Play). In this assignment the aim is to demonstrate to what extent language creativity is present in everyday language. The main discussion will evolve around a transcript from CD-ROM Band 12 from this course. This will be concluded with specific references to strengths and limitation features of studies into language creativity. Language creativity can be found in a wide variety of different language practices. One comes across it in anything from advertisements or banners to literature. For example, small children are also able to tell and receive a joke which means that they are capable of recognising creative play through the semantics of words. Children also like using their minds productively for instance either by making up their own stories or by re-telling a fairy tale. Moreover, it is particularly in early childhood that is the period of life and mode of being in which linguistic creativity occurs in interesting ways. Language play especially amongst children is also commendable of an investigation for its own sake. Guy Cook (2000) looked at children's fixations on story bound activities. 1Children are often not interested in school "work" in particular after school instead they are keener to enter the world of "make-believe" in a variety of forms from computer games to bed-time stories. ...read more.

Children's creative play with language as well as their actual play is "practice" in a dual sense. It is both social and a preparation for adult life. "Pretend play" is part of a child's cognitive development. The psychologist Vygotsky (1935) thought that the activity of engaging in cooperative pretend play facilitates socialisation and helps children to learn how to take part in cultural practices as a part of the society in which they live. He quotes "play is the natural means of a child's self-education, an exercise oriented towards the future." 6With this the child's personality develops as he/she adopts cultural norms and is shaped as a person. Fein (1978) studied children's language development and saw it is a form of rehearsal and it appears spontaneously in everyday talk. (CHECK).In the concept of performance as a whole, Bauman (1977) stressed the 'designed for performance' part of fictional presentation, portraying on many examples from oral-based societies and disputes that 'aesthetic' fulfilment may only result from a presentation and suitable assessment of verbal skill.7 This can be applied to the transcript. Furlow (2001) researched into everything from neurobiology to behavioural ecology in relation to play and found that it is a behaviour that increases children's potential for learning. According to a neuroscientist Siviy bouts of play increase the brain's activation of specific protein associated with the stimulation and growth of nerve cells. 'Play just lights everything up', [Siviy says]. He speculates that by allowing connections between brain areas that might not normally be connected, play may be enhancing creativity. (Furlow, 2001, p.30)8 According to Ben Rampton on Band 8 of CD-ROM1, Bauman thought that performance involves "putting yourself in an interactional spotlight, taking responsibility for putting on a good show". ...read more.

a brief pause, untimed (xxx) unclear speech that could not be transcribed (he) transcription unclear, a guess ((sharp intake of breath)) specific non-speech element * indicates a particular point where an action occurred (mentioned in the nonverbal column) Paralinguistic features Aalliya is wearing pink skirt Laura pulls up her skirt (there cant you see it) Aalliya runs across room Laura puts on her cloak Aalliya singing and going through Laura's things on a shelf Laura shouts (before Aalliya shows something and asks is this yours) Aalliya has found something a bag? (mumble) Laura in a bossy voice Aalliya is sitting on sofa in Laura's living room Laura walks around in front of Aalliya Line they just went to workshop..Aallyia waves her left arm Laura Oh...sits down on a seat " stands up and shows her left hand holds both hands up and counts Whispers seven dwarfs (L) L holds out her hand to A and pulls her to her feet L gives A apple (imaginary) A eats apple (again imaginary) A falls half way down so that she is still seated and looks at A questioning her A completely falls down L comes over to A who is still on floor and puts her hands down on A kneeling L gets up again and A is still lying on floor L helps A to stand up again L "hugs" A and brings her over to another sofa (first they go wrong way..L redirects as to where the "coffin" is) A half lies on sofa with legs dangling so L puts A's legs up on the sofa L puts A's body the "right" way L takes a blanket and puts is on over A and her face Then L changes her mind and pulls blanket down again.... ...read more.

The essay draws upon the writer's own insights into the audio recording of the two girls playing, plus the research of a number of relevant authorities, to give us a competent overview of the work done in the field of English language creativity in relation to early development. However, she does not present her conclusions so we are left wondering where all this has brought us.

Paragraph construction is generally well managed according to subtopics. Sentence construction is mostly competent, with occasional slips in punctuation and grammar. Lexis is highly technical and appropriate to the task.