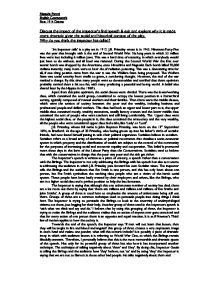 Discuss the impact of the inspector's final speech &amp; exit and explore why it is made more dramatic given the social and historical context of the play. Why do you think the inspector has called?

Discuss the impact of the inspector's final speech & exit and explore why it is made more dramatic given the social and historical context of the play. Why do you think the inspector has called? 'An Inspector calls' is a play set in 1912. J.B. Priestley wrote it in 1945. Nineteen-Forty-Five was the year that brought with it the end of Second World War. Six long years in which 55 million lives were lost including 6 million Jews. This was a hard time of austerity, in which everybody would just have to do without, and all food was rationed. During the Second World War the first ever atomic bomb was dropped by the Americans, onto Hiroshima and Nagasaki. Each bomb killed 70,000 civilians instantly; many more were to later die of radiation poisoning. This was a devastating time for all, if one thing positive came from the war it was the Welfare State being proposed. The Welfare State was social security from cradle to grave, a comforting thought. However, the end of the war marked a change. By this time many people were so downtrodden and terrified that there optimism probably carried them a bit too far, with many predicting a peaceful and loving world. A belief also shared later by the Hippies in the 1960's. Apart from this joint optimism, the social classes were divided. There was the lower/working class, which contained the social group, considered to occupy the lowest position in a hierarchical society, typically composed of manual workers and their families. Then there were the middle classes, which were the section of society between the poor and the wealthy, including business and professional people and skilled workers. This class had both an upper and lower part to it, the upper middle class contained mostly, wealthy executives, usually factory owners and the lower middle class contained the sort of people who were teachers and still living comfortably. ...read more.

Therefore, I would have the whole stage dimmed with the exception of a bright spotlight on Inspector Goole, who is centre stage at this time. Before the speech, the Birling family has just been informed of Eric's part in Eva's demise. Eric then realises his mother played a part in the death of his unborn child, and therefore gets angry with her. Although this is quite an active scene, Inspector Goole can bring the whole stage to silence during his dialogue. Adding to the already stunned response of the listeners after he has delivered his speech the inspector suddenly turns and walks out. I would have the actor playing Inspector Goole, leave quickly with purpose, large strides and look only straight ahead, as if dismissing the Birling family like a bad smell. As the inspector leaves the only sound heard is the last of his footsteps fading away, the door being slammed and an uncanny silence. This silence is very effective in getting the Birling family and the audience to think about the meaning behind the speech. This painful silence is broken by Shelia Birling who bursts into tears. As the inspector leaves the family is left with Inspector Goole's words ringing in their ears. All the characters are left thinking about their part in Eva Smith's demise, each taking a different approach with dealing with this. Shelia Birling is left in tears, an obvious sign of remorse. Throughout the play, Shelia has come far, now accepting that she was empty headed. When Shelia realises that her jealousy made Eva lose her job and starting her downward spiral, Shelia is genuinely sorry. I can see this when she bitterly says; 'I know. I had her turned out of a job. I started it'. This shows she understands what the inspector is trying to say, that she has a responsibility according to the inspectors values and not those of her family. ...read more.

The best example of this function is in the inspector's speech when he says 'millions of Eva Smiths and John Smiths still left with us their lives intertwined with our own. We are responsible for each other.' This extract just shows that the inspector does not want this point going to be overlooked and therefore re-enforces this point as one of his last words. I personally believe that Inspector Goole is successful in his five main functions. By the term functions I am referring to the main question asked which was 'Why do you think he inspector has called?' This can be demonstrated by the way the characters react after his departure. Arthur, Sybil and Gerald were not as affected whereas the inspector's message has definitely sunk into the minds of Shelia and Eric. It was not only the characters that J.B. Priestley wanted the inspector to have an affect on, but also the audience. I believe that the inspector was successful in this also. This is because whilst reading the play I felt the emotions running though the play and even the slight anxiety that I would be the next to be interrogated. It also made me consider if any of the things I have done have had a negative effect on the lives of others. So, that is why I think that is why the inspector has called and not only affected the lives of the characters but the lives of the audience also. After Inspector Goole departs from the scene, Gerald returns with the news that the inspector was a hoax of some kind and there was no girl that died. Almost immediately, the phone rings and announces that a girl has just died and an inspector is about to call. I believe that after this news the Birling family and Gerald Croft now face a dilemma. Will they take the inspector's advice or will they cover up their actions? This is a question left in the mind of the audience. ?? ?? ?? ?? Natasha Parcei English Coursework Post 1914 Drama ...read more.