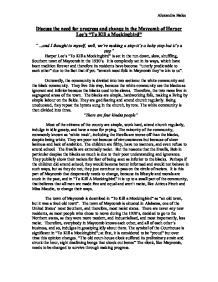 Discuss the need for progress and change in the Maycomb of Harper Lee's &quot;To Kill a Mockingbird&quot;.

Discuss the need for progress and change in the Maycomb of Harper Lee's "To Kill a Mockingbird" "...and I thought to myself, well, we're making a step-it's a baby step but it's a step" Harper Lee's "To Kill a Mockingbird" is set in the run-down, slow, shuffling, Southern town of Maycomb in the 1930's. It is completely set in its ways, which have been tradition forever and therefore its residents have become "utterly predictable to each other" due to the fact that if you "scratch most folk in Maycomb they're kin to us". Outwardly, the community is divided into two sections: the white community and the black community. They live this way, because the white community see the blacks as ignorant and inferior because the blacks used to be slaves. Therefore, the two races live in segregated areas of the town. The blacks are simple, hardworking folk, making a living by simple labour on the fields. They are god fearing and attend church regularly. Being uneducated, they repeat the hymns sung in the church, by rote. The white community is then divided into three. "There are four kindsa people" Most of the citizens of the county are simple, work hard, attend church regularly, indulge in idle gossip, and have a nose for prying. The minority of the community, commonly known as 'white trash', including the Ewells are worse off than the blacks, despite being white. They are poor not because of circumstances but because of sheer laziness and lack of ambition. ...read more.

"Miss Caroline began the day by reading us a story about cats." Scout, unlike the rest of her class, is perfectly literate, and therefore is bored out of her mind when told to learn the alphabet. "she discovered that I was literate and looked at me with more than faint distaste." The education system uses a "pigeonholing" method of teaching, typical of the Democratic beliefs that run through the southern states at the time. "try to undo the damage" Scout and Jem learn so much more outside of the school than they do in school, because Atticus teaches them about life. However, Miss Caroline tells Scout, "Your father does not know how to teach" which is so ironic, as Atticus teaches Scout and Jem much more important lessons than those that they learn in school. Scout is told that she is not allowed to continue reading at home, and this devastates Scout, "Until I feared I would lose it, I never loved to read. One does not love breathing" This heavily emphasises the fact that reading, and education is as essential as air for progress to take place. It becomes very apparent that the people in charge of education know little about teaching methods when Scout describes the "Current events period". The lesson does sound like a rewarding lesson for the school children, until the reasons why they have the period are made clear. "Standing in front of his fellows encouraged good posture and gave a child poise;" Scout sees the poor education she is receiving, and describes herself as "inching sluggishly along the treadmill of Maycomb's education system." ...read more.

"There's no way no jury can convict on what we just heard" The jury still found Tom guilty. To the children, "each guilty was like a separate jab". However, the jury took over four hours to reach a unanimous decision. However, at least the jury had thought about all the decisions and it had taken 4 hours for some of the jury members to back down. Some of the jury members being Cunninghams, who earlier on in the novel were taking part in the lynch mob, who were going to lynch Tom Robinson. However, Atticus knew that the jury would charge Tom Robinson with rape, "He was guilty the second Mayella Ewell opened her mouth" Atticus left that case hopefully, because something had changed in the mind of the jury. Throughout the novel, it is made clear that for progress and change to be made, education and time is needed. However, when the education system is as poor as it is in Maycomb, it is much more difficult. The majority of the younger generations in Maycomb are badly influenced by their elders, continuing racism travelling through the generations. Racism needs to be stopped altogether, as portrayed by Harper Lee in the symbols of the nutgrass and the fire. Even a tiny amount of racism is easily spread. It is also clear that change takes time and is not going to happen all at once. Therefore, the non-racist part of Maycomb's community is waiting eagerly for this change to happen. "...And I thought to myself, well, we're making a step-it's a baby step but it's a step" Alexandra Halse ...read more.