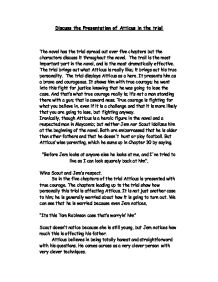 Discuss the Presentation of Atticus in the trial

Discuss the Presentation of Atticus in the trial The novel has the trial spread out over five chapters but the characters discuss it throughout the novel. The trail is the most important part in the novel, and is the most dramatically effective. The trial brings out what Atticus is really like; it brings out his true personality. The trial displays Atticus as a hero. It presents him as a brave and courageous. It shows him with true courage; he went into this fight for justice knowing that he was going to lose the case. And that's what true courage really is; it's not a man standing there with a gun; that is coward ness. True courage is fighting for what you believe in, even if it is a challenge and that it is more likely that you are going to lose, but fighting anyway. Ironically, though Atticus is a heroic figure in the novel and a respected man in Maycomb; but neither Jem nor Scout idolizes him at the beginning of the novel. ...read more.

He obviously is not, as he is aware of what is going on but he does this to emphasise his point; in this case that a doctor should have been called unless the person, Bob Ewell, has beat Mayella himself. He then repeats the doctor point to other witness' he questions, emphasising his point to the reader. He comes across as very skilful as he deceives the audience and scout uses a simile to show she doesn't think he knows what he is doing, "I was becoming nervous. Atticus seemed to know what he was doing- but it seemed to me that he'd gone frog-sticking without a light." This shows us that Atticus is very talented in being able to trick people into think that he isn't aware. This could only seem this way to us, though, because we are reading it from Scouts point of view, and through this she is showing her immaturity by not understanding. We know Jem does understand what is going on as the novel says, "Jem seemed to be having a quiet fit... ...read more.

He uses repetition, similes and suggestive sentences such as, "The defendant is not guilty, but somebody in this courtroom is". He uses words that imply other things. He uses black and white imagery and repetition to emphasises the fact that a man should not be convicted on his colour of his skin. This part of the novel also shows how affected Atticus is of this case, his last words of his speech, "In the name of God believe him" The writer presents Atticus this way as the mouthpiece for the entire novel. She is clearly trying to get across the message that the law is unjust and prejudice. But the message that she did manage to achieve was that even though Atticus tried, he was not able to change the minds of the racist prejudice people in Maycomb. But he did keep the jury out a log time. This means that they were thinking about it, he made them think. So even though Tom Robinson didn't escape, a small step has still been made to the unjust society, to making it right and honest. ...read more.