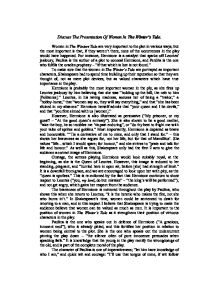 Discuss The Presentation Of Women In The Winter&amp;#146;s Tale.

Discuss The Presentation Of Women In The Winter's Tale. Women in The Winters Tale are very important to the plot in various ways, but the most important is that, if they weren't there, none of the occurrences in the play would have happened. For instance, Hermione is a catalyst that sparks off Leontes' jealousy, Paulina is the author of a plot to conceal Hermione, and Perdita is the one who fulfils the oracles prophesy - "if that which is lost is not found." To make sure that the women in The Winter's Tale are portrayed as important characters, Shakespeare had to spend time building up their reputation so that they are thought of, not as mere plot devices, but as valued characters which have true importance in the play. Hermione is probably the most important woman in the ply, as she fires up Leontes jealousy by him believing that she was "holding up the bill, the neb to him [Polixenes]." Leontes, in his raving madness, accuses her of being a "traitor," a "hobby-horse," that "women say so, they will say everything," and that "she has been sluiced in my absence." Hermione herself admits that "your queen and I be devils," and that "you first sinned with us [women]." ...read more.

She also embodies goodness, which is hardly likely, but when she scolds Leontes, even he tells her to "go on, go on...I have deserved all tongues to talk their bitterest." However, even after her betaking him "to despair," she still allows Leontes to "awake his faith," and grants him his wife. Even through this emotional act, her imperativeness comes through - "Music; awake her, strike." Paulina, after Camillo has departed, seems to take the position of trusted advisor to the king. This is a great role, and the fact that she is placed in this role must mean that she is an important character in The Winter's Tale. Camillo was honest and can admit wrongdoing - "I ever I were wilful-negligent, it was my folly." Paulina is mirrored in this role, which makes me believe that they share the same values as each other. Indeed, Leontes, at the end of the play, marries them, - "Come, Camillo, take her by the hand, whose worth and honesty is richly noted." Despite her "rashness of a woman," Paulina is called "good Paulina" by Leontes. This indicates that she has been like a nurse to him, who are usually associated with "healing the disease." This adds to the character of Paulina, and this trait she has particular with Hermione (a good mother), which toughens the role of women in the play. ...read more.

This helps the spectators on their way to interpret their view on the women in the play, be it for good or for worse. The position of women is very difficult to interpret in The Winter's Tale. Hermione, Paulina, and Perdita are all shown as vital plot devices, and they are also shown as brave and helpful. Shakespeare seems to be making a point about social hierarchy in the day, and the fact that even women in the play are played by women (unheard of in Shakespearian times), is making a poignant statement about the role of women in the play. Women are portrayed as virtuous and as a reward for those who truly repent (such as when Hermione "hangs about [Leontes] neck."), and help the moral value of the play shine through, which is one of "reconciliation and mercy," - "even extended to the unworthy." However, women are also shown as "deceitful and...sluiced in's absence." However, as Leontes is proven wrong by the oracle, this claim can be dismissed as jealous ranting, and that the audience should more likely show pity to Hermione, not disgust. Women in The Winter's Tale are as vital as the male characters, I believe, and that, during the course of the play, much abuse is heaped on them. Shakespeare wanted to show the heavy burden of being a woman in his time, and wanted to make a statement against the stereotypical view of them. ...read more.