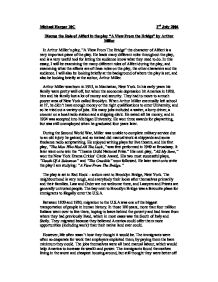 Michael Harper 10C 3rd July 2004 Discuss the Role of Alfieri in the play "A View From the Bridge" by Arthur Miller In Arthur Miller's play, "A View From The Bridge" the character of Alfieri is a very important piece of the play. He leads many different roles throughout the play, and is a very useful tool for letting the audience know what they need to do. In this essay, I will be examining the many different roles of Alfieri during the play, and examining what the effects are of these roles on the play, the other characters and the audience. I will also be looking briefly at the background of where the play is set, and also be looking briefly at the author, Arthur Miller. Arthur Miller was born in 1915, in Manhattan, New York. In his early years his family were pretty well off, but when the economic depression hit America in 1929, him and his family lost a lot of money and security. They had to move to a much poorer area of New York called Brooklyn. When Arthur Miller eventually left school at 17, he didn't have enough money or the right qualifications to enter University, and so he tried out a variety of jobs. His many jobs included a waiter, a lorry driver, a crooner on a local radio station and a shipping clerk. He saved all his money, and in 1934 was accepted into Michigan University. He won three awards for playwriting, but was still unemployed when he graduated four years later. During the Second World War, Miller was unable to complete military service due to an old injury he gained, and so instead did manual work at shipyards and some freelance radio scriptwriting. He enjoyed writing plays for live theatre, and his first play, "The Man Who Had All The Luck," was first performed in 1949 at Broadway. ...read more.

This provides a convenient and simple way to link various scenes together, thus moving the story on. Shortly after this second speech of his, the play continues with the Carbone family meeting the two cousins, Marco and Rodolpho. Everybody gets along fine, although the atmosphere of the scene finishes off quite tight. It is then that Alfieri makes his third appearance of the play. This time he also acts as the narrator, speeding time up for the benefit of the audience. This particular speech is one of the most significant of the play, since it leaves the audience with their biggest clue of what is going to happen. He starts off by going over his belief that Eddie is a happy family man, who wasn't anything special: "Eddie Carbone never expected to have a destiny. A man works, raises his family, goes bowling, eats, gets old, and then he dies." This emphasizes to the audience that Eddie was just an ordinary man who looked after himself and his family in times of trouble. But then Alfieri drops the subtle hint of trouble to Eddie's life, which really sets the main part of the story off: "...there was a trouble that would not go away." This is likely to grab the audience's attention, since they will naturally be intrigued as to what "trouble" is going to happen. In this speech, Alfieri informs the audience that something bad will happen. He voices out what he truly believes, and says things that no other character would dare say. The audience have begun to trust him as a character, and since most of what he says in fact, later on in the play when he starts voicing his own opinion in matters as a character rather than a narrator, the audience also dismiss these opinions as fact, providing further speculation as to what will happen. This means that Alfieri also helps to plant possible ideas in the heads of the audience. ...read more.

Alfieri also finally confirms that he and Eddie were good friends, and does so in a moving speech that concludes and ends the play, but also hints that just because Eddie is now dead, life for the characters will not become much easier: "I will love him more than all my sensible clients." "And so I mourn him - I admit it - with a certain... alarm." In conclusion, Arthur Miller uses the role of Alfieri to do many jobs in the play. First and foremost, Alfieri is a narrator, and explains the situations to the audience, to help them understand more of what is going on. He fills in missing pieces in the audience's heads about the pasts of the characters, at the same time drops possible hints about the future of the characters and what will happen, thus keeping the audience hooked on the play, and wanting to know what we happen. He is used as a device to speed time forward, as his narrations can easily end some scenes off, tie loose ends together and just as easily start others off at whatever period of time needs to be visited and told of. Finally, Alfieri also plays the role of an actual character and participant in the play on various occasions, where his actions and opinions affect those of the main characters, letting Alfieri affect how the story takes shape and progresses. He can be used to say things other characters may think but don't dare say, since his character is a friend to most others and they respect him. He gives them advice, and acts as a bridge between the lawful world of New York and the world of Red Hook, where the play is set and where law and order are not welcome, just like Brooklyn Bridge links the two. That is why Alfieri is such an important character to the play, and why Alfieri can be thought of as "The View From the Bridge." ...read more.