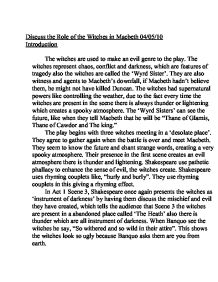 Discuss the Role of the Witches in Macbeth

Discuss the Role of the Witches in Macbeth 04/05/10 Introduction The witches are used to make an evil genre to the play. The witches represent chaos, conflict and darkness, which are features of tragedy also the witches are called the 'Wyrd Sister'. They are also witness and agents to Macbeth's downfall, if Macbeth hadn't believe them, he might not have killed Duncan. The witches had supernatural powers like controlling the weather, due to the fact every time the witches are present in the scene there is always thunder or lightening which creates a spooky atmosphere. The 'Wyrd Sisters' can see the future, like when they tell Macbeth that he will be "Thane of Glamis, Thane of Cawdor and The king." The play begins with three witches meeting in a 'desolate place'. They agree to gather again when the battle is over and meet Macbeth. They seem to know the future and chant strange words, creating a very spooky atmosphere. Their presence in the first scene creates an evil atmosphere there is thunder and lightening. ...read more.

l'th name of truth." This shows that Banquo is telling Macbeth not to believe the evil witches straight away. The witches vanish into mid-air showing their supernatural powers through out the play. Lastly when Ross and Lennox tell Macbeth that he is "Thane of Cawdor", Macbeth starts to believe the witches predictions and start to think that he will become king. The witches' prophecies affect Macbeth behavior firstly. Macbeth considers the moral issue surrounding the witches' predictions. He says, "If good why do l'yeild to that. Suggestions, whose horrid image doth unfix my hair and knock at my ribs against the use of nature?" The Thane of Cawdor is horrified of the idea of killing Duncan so he can become the king. He eventually does kill Duncan to become the king; however he is not satisfied he say, "Upon my head they placed a fruitless crown". He remembers the witches' prophecy that Banquo son will be king so he arranged to have them killed. At the beginning of Act 4 Scene 1, the witches are making a spell. ...read more.

Macbeth! Beware Macduff". The second apparition is, "a bloody child", "For none of born woman born shall harm Macbeth". The third apparition is, "a child crowned, with a tree in his hand", "Macbeth shall never be vanquished be until Great Birnam Wood to High Dusinane Hill shall come against him". All prophecies were told by visions. Macbeth does not believe what he has seen and can't see how it can be true because a forest cannot move and a man has to be born of woman. The last scene was an eventful and tragic scene. Everything the witches told Macbeth has came true. The evil witches' mission is accomplished, Macbeth is dead. Macbeth the brave soldier which transforms into a greedy fiend that kills Macduff family. Macbeth was at last killed by Macduff. The witches tricked Macbeth by telling him that he is invincible and none of the prophecies will come true. The evil witches are responsible for Macbeth downfall they planted a seed in his head which changed him in to an evil blood thirsty monster. If Macbeth hadn't fallen in with the witches he wouldn't be evil because the witches persuade him to kill the King, then he carried on killing people and getting people killed. ...read more.

There are some really good ideas such as the darkness and evil portrayed by witches, and how they seem to have magical powers. However there is some repetition and the essay doesn't really flow, the candidate's thoughts seem to be ...

There are some really good ideas such as the darkness and evil portrayed by witches, and how they seem to have magical powers. However there is some repetition and the essay doesn't really flow, the candidate's thoughts seem to be a little jumbled. At times they just retell parts of the story without discussion to its significance. I would recommend that these ideas are organised perhaps by going through the play from the beginning, and talking about the different scenes in which the witches appear in sequence.

I feel that the opening sentence could be stronger by talking about the essence of evil the witches bring and how Shakespeare sets the scene, what about the setting makes you think of evil? Although the candidate has used quotes to try and back up their opinions, they are using quotations to retell the story rather than to analyse it. There are times where quotations are used effectively and the character's thoughts and feelings are discussed, this is done well, (such as in the beginning of the fifth paragraph) but just not often enough through out the essay. There is a paragraph where the use of linguistic terms are analysed, however this doesn't flow with the essay and I feel it could be done more effectively, if broken down and mentioned in smaller pieces throughout the essay rather than a huge chunk in the middle.

There are some issues with spelling and grammar, that need to be looked at, some sentences are worded badly and needed to be altered, particularly in the first paragraph. I feel that the essay doesn't really flow, it's more of a jumble of thoughts held loosely together.