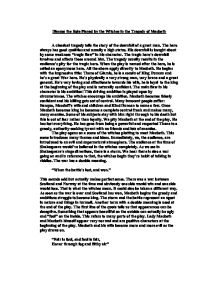 Discuss the Role Played by the Witches in the Tragedy of Macbeth A classical tragedy tells the story of the downfall of a great man. The hero always has good qualities and usually a high status. His downfall is bought about by some weakness "tragic flaw" in his character. The tragic hero's downfall involves and affects those around him. The tragedy usually results in the audience's pity for the tragic hero. When the play is named after the hero, he is called an eponymous hero. All the above apply directly to Macbeth. He begins with the impressive title: Thane of Glamis, he is a cousin of King Duncan and he's a great War hero. He's physically a very strong man, very brave and a great general. He's very loving and affectionate towards his wife, he is loyal to the king at the beginning of the play and is naturally confident. The main flaw in his character is his ambition! This driving ambition is played upon by circumstances. The witches encourage his ambition. Macbeth becomes falsely confident and his killing gets out of control. Many innocent people suffer: Banquo, Macduff's wife and children and Kind Duncan to name a few. Once Macbeth becomes king he becomes a complete control freak and makes many, many enemies. Some of his subjects stay with him right through to his death but this is out of fear rather than loyalty. We pity Macbeth at the end of the play. He has lost everything. He has gone from being a powerful and respected Thane to a greedy, authority-seeking tyrant with no friends and lots of enemies. The play opens on a scene of the witches plotting to meet Macbeth. This scene introduces many themes and ideas. Immediately, we, the audience, are introduced to an evil and supernatural atmosphere. The audience at the time of Shakespeare would've believed in the witches completely. ...read more.

She clearly believes that they are such a strong team and that nothing can go wrong. Lady Macbeth has been plotting herself. She explains to Macbeth that she will get the King's chamberlains drunk so the murder will be possible. Macbeth ends this scene with what seems like a sad line. He knows what he is doing is wrong but he must fight against that feeling for his wife. The woman he sees as his dearest partner in greatest. The same woman who is almost forcing Macbeth to kill Duncan. "False face must hide what the false heart doth know." Lady Macbeth really comes across as a villain in this scene. She takes a powerful, confident and well-loved man and turns him into her servant. She knows exactly how to get her own way with him and is very manipulative in this scene. In the first scene of Act 2, a great mood is created. There are all sorts of unnatural happenings going on. An atmosphere of darkness and evil is introduced as early as the second line of the Act. Banquo addresses his son, Fleance, and asks, "How goes the night..." Fleance replies, "The moon is down..." This adds to the atmosphere. They are stood almost in darkness. We're led to believe that it's after twelve o' clock. The witching hour. Macbeth approaches Banquo and Fleance and Macbeth and Banquo talk of "...the three weird sisters..." The talk of the witches reminds us what evil still lurks around the two of them. Banquo says he is dreaming of them and wonders if Macbeth does also as one of the predictions for Macbeth came true. "I think not of them..." Macbeth replies. Fleance and Banquo leave. Macbeth proceeds to the King's chamber. On his journey to his chamber he embarks upon an apparition. He sees a dagger hovering in front of his eyes. The very word "dagger" fills us with excitement. ...read more.

I think Macbeth feels guilty for killing all his family. Macbeth warns Macduff that he leads "...a charmed life..." and explains that he cannot be killed by any man born of a woman. Macbeth is confident he has won already, until Macduff shatters everything with some amazing news. Macduff was born by a caesarean section. Macbeth's bravery and confidence is stolen from him and he feels helpless. "Accursed be that tongue that tells me so; For it hath cow'd my better part of man..." Macduff calls Macbeth a "coward" and a "tyrant". But Macbeth refuses to give up and be a prisoner to Malcolm. He will go out fighting as he promised. Macbeth finally challenged Macduff. The pair fight and leave the stage. Macduff returns moments later with Macbeth's head. I think Macbeth let himself believe he could lose and that's why he lost. He was probably a better war hero than Macduff and he's fighting skills would've been magnificent. The only thing that stopped him killing Macduff first was his own self-doubt. Macbeth was a fine fighter until he realized that Macduff fitted the witches' description. Macbeth relied so much on what the witches had told him that his whole life revolved around getting and keeping power. He killed his cousin, his best friend, whole families and countless innocent others. His wife died because of his ambition and so did he. Macbeth was a highly respected, rich, happy, strong, loved and admired Thane at the beginning of the play and ends up seen as a "dead-butcher" and his wife a "fiend-like queen". All this because of his uncontrollable ambition encouraged, undoubtedly, by the sick playful games of the witches. Once Macbeth obtained the power he was too much of a control freak to let the killing stop there. Anyone who threatened his crown was to be killed. I don't think that the witches or Macbeth were solely to blame. Neither one would've achieved the same results alone; I think this was just unfortunate circumstances that may have been controlled and most definitely encouraged by certain individuals. Andrea Thomas. 11.5 ...read more.

The is too much retelling of the story, which is basically why this essay is so long and therefore the candidate doesn't discuss the title of the essay at all. The candidate basically goes through the whole play, instead of ...

The is too much retelling of the story, which is basically why this essay is so long and therefore the candidate doesn't discuss the title of the essay at all. The candidate basically goes through the whole play, instead of focusing on essential scenes such those in which the witches appear. My advice would be to cut down and refocus this essay.

The use of quotations feels forced, they do not always fit in with the essay and they are represented badly, the candidate should not have added each quotation as a new paragraph. There is an instance where the candidate paraphrases and then adds in a whole chunk from the play, including who is speaking, this is just not necessary. For the most part the candidate uses quotations to retell the story, however there are attempts to analyse the meaning behind them. The candidate does actually have some interesting ideas especially in the beginning of the ninth paragraph. The essay appears to become more in depth the further you read.

The number and amount of quotations used needs to be reduced. Also there doesnÃ¢â‚¬â„¢t appear to be an analysis of linguistic terms such as alliteration, repetition and the use of metaphors and how these add depth to the play. There is actually a good range of vocabulary used throughout the essay. The essay flows well and is fairly fluent. There a few issues with spelling and grammar, mostly though this isnÃ¢â‚¬â„¢t too bad.