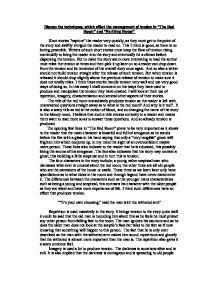 Discuss the techniques, which affect the management of tension in &quot;The Red Room&quot; and &quot;Farthing House&quot;.

Discuss the techniques, which affect the management of tension in "The Red Room" and "Farthing House" Short stories "capture" the reader very quickly, as they must get to the point of the story and swiftly intrigue the reader to read on. This I think is good, as there is no boring preamble. Writers of such short stories must keep the flow of tension rising continually to bring the reader into the story and eventually hit a climax before dispersing the tension. But to make the story seem more interesting to read the author must relax the tension at times and then pick it up later on so a reader can drop down from the tension and be reminded of the overall story once again. And so also a writer should not build tension straight after the release of such tension. But when tension is released it should drop slightly above the previous release of tension to make sure it does not totally relax. I think these stories handle tension very well and use very good ways of doing so. In this essay I shall comment on the ways they have used to produce and manipulate the tension they have created. I will look at their use of repetition, imagery, characterisation and several other aspects of their stories. ...read more.

The man ignores his cautions and as he does the older man does not look at the sceptic's face but talks to his feet as if now knowing that something will happen to this person. The fact that he is only ever described as the man with the withered arm makes him sound mysterious and ghostly that the withered is almost more important than the man is. The repetition also gives it a scary ominous feel. Imagery is used a lot to produce tension. The darkness is somehow alive and is evil. It is also implied that the darkness is contagious and is spreading to old people making them lose their human qualities "insensibly day by day". He keeps personifying the shadows as he infers that one seems too be "crouching" to "waylay" him. As if maybe there to stop him from entering this room. Shadows and darkness were everywhere as the red room is covered in it as there are many recesses that would confuse him as he cannot see anything there and this darkness proves too "stimulating" for his mind as darkness could contain anything. He then explores these recesses, plants candles so there is no darkness to be unsure of. Even the fact that the three caretakers are huddled in one spot, around the fire staring hard into it concentrating on the light as far as possible from the red room adds to the idea that the darkness is "bad". ...read more.

The senses that she first uses is her sense of smell as she is first reminded of the event at farthing house. When she first awakens in the night to a baby crying that after investigating is not there at all. Again spooky questions arise. Also in this time she first awakens she is sure that someone has been in her room but she has no way of telling and so the character will feel uneasy and the first-person viewpoint of the story amplifies the uneasiness, which produces tension. Also as she first remembers what has happened as everything floods back to her she later reads a story in the newspaper concerning her experience, she said her eyes were drew to that particular story as if when primarily remembered she did so only because of the story happening. Again on her way to Farthing house in her story she was drawn to the graveyard was a young mother and child had died. These happenings are quite ghostly and hard to believe but far believable than that of the "The Red Room" and gives a more modern look on ghosts as not just being scary. I think the idea of her being drawn to places and things works particularly well for producing tension as like other things in the story it creates mystery in the story and makes it harder to rationally dismiss it as pure science-fiction as it sounds believable. ...read more.