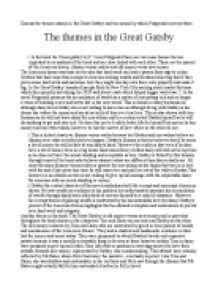 Discuss the themes (ideas) in 'the Great Gatsby' and the means by which Fitzgerald conveys them.

﻿Discuss the themes (ideas) in 'the Great Gatsby' and the means by which Fitzgerald conveys them. The themes in the Great Gatsby 1. In the book the 'Great gatsby' by F. Scout Fitzgerald there are two main themes that are important to an analysis of the book and are close linked with each other. These are the pursuit of the American dream, illusion versus reality and old money verus new money. The American dream was base on the idea that hard work can lead a person from rags to riches. Stettlers that had come from europe to America seeking wealth and freedom believing that if they put in some hard work and had some luck they might one day own there own property and make it big. ...read more.

1. This is linked closely to illusion versus reality because bot Gatsby and mrs wilson believe an illusion over what is really likely to happen. Gatsby's illusion is that he believes that if he earns a lot of money he will be able to win daisy's hand. However the reality is that even if he does have a lot of money lives in a big house hand wears fancy clothes daisy will still not accept him as he does not have the social standing and acceptable as tom. Gatsby is fooled by this illusion throught most of the book ashe believes daisy's values are different than they actually are. All most the same illusion versus reality is present for mrs wilson as she thinks that tom is in love with her and if she gives him time he will marry her and pull her out of the ...read more.

The old money is shown by Tom and Daisy who are motovated by greed in their pursuit of wealth and maintanance of the 'American Dream'. They lead a shallow and headanistic existance in their lust for money and social status. They were prepeared to attend Gatsby's lavish and expensive parties because it was a socially exceptable thing to be seen at them however nethier Tom or daisy were prepared to give up each other, their life-style or position in west egg society for love.their attitude towards new money, represented by Gatsby, was candescending. This attitude was certainly reflected by Ms Baker whom Nick Carroway, the narrator , eventually rejected. Like Tom and Daisy, she was shallow and materialistic in her out look and Nick saw through the illusion that Ms Baker might actually fall for him and ended it before he fell in love3 ...read more.