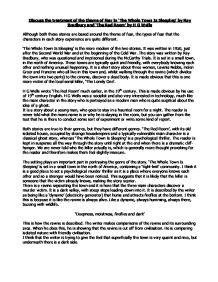 Discuss the treatment of the theme of fear in 'The Whole Town Is Sleeping' by Ray Bradbury and 'The Red Room' by H G Wells.

Discuss the treatment of the theme of fear in 'The Whole Town Is Sleeping' by Ray Bradbury and 'The Red Room' by H G Wells Although both these stories are based around the theme of fear, the types of fear that the characters in each story experience are quite different. 'The Whole Town Is Sleeping' is the more modern of the two stories. It was written in 1950, just after the Second World War and at the beginning of the Cold War. The story was written by Ray Bradbury, who was questioned and imprisoned during the McCarthy Trials. It is set in a small town, in the north of America. These towns are typically quiet and friendly, with everybody knowing each other and nothing unusual happening. It is a short story about three women, Lavinia Nebbs, Helen Greer and Francine who all live in this town and, whilst walking through the ravine (which divides the town into two parts) to the cinema, discover a dead body. It is made obvious that this is one more victim of the local serial killer, 'The Lonely One'. H G Wells wrote 'The Red Room' much earlier, in the 19th century. This is made obvious by his use of 19th century English. H G Wells was a socialist and also very interested in technology, much like the main character in the story who is portrayed as a modern man who is quite sceptical about the idea of a ghost. It is a story about a young man, who goes to stay in a haunted room for a night. The reader is never told what the mans name is or why he is staying in the room, but you can gather from the text that he is there to conduct some sort of experiment or write some kind of report. Both stories are true to their genres, but they have different genres. ...read more.

At first he is quite confident about his stay, but it doesn't take long for him to start getting scared. He is all right when the room is lit with candles, he gathers as many as he can and lights them all. The room is full of light and he is not scared, but as the night goes on, he gets more scared as the candles start going out. The candles were what stopped him from being scared, but now they start to go out of their own accord and he doesn't know what to do. He re-lights them, but they just carry on going out. This is when he panics and gets scared. He still thinks that he can fight the supernatural. He continues trying to re-light the candles but the 'ghost' is too quick for him and he has soon lost the battle and is scared. He tries to escape, but he is panicking too much. He is hysterical and can't remember where the door is. It ends with him hitting his head and passing out. Lavinia Nebbs from 'The Whole Town Is Sleeping' is also very sceptical. When Lavinia and Francine find the body of Eliza Ramsell in the ravine, they are both in shock, but Lavinia realises that she needs to be strong for Francine and try and make them both forget about it. Francine wasn't even thinking about carrying on to the cinema, but Lavinia decides that they should, as it will take their minds off it. The film they are going to see is 'Welcome, Danger!' a film that was made long before this story is set. I think the writer used this film as the title makes the reader begin thinking about danger and starts to worry slightly. When Lavinia and Francine finally get to their friend Helen Greer's house an hour late, Francine is about to tell Helen that they found the body, when Lavinia cuts in and says that someone found the body, but they don't know who. ...read more.

'Behind her, in the black living-room, someone cleared his throat...' That is how the story is finished. I don't particularly like this ending as I am not a fan of open-ended stories. I like to know exactly what happens. There are a number of people it could be in that room but the obvious, and the person that the writer wants you to think it is, is a murderer or someone that will harm her. There are a number of suspects, but the reader is never told who it actually is. By the end of the story, both characters' opinions haven't been changed since the beginning. Lavinia, even after being scared at the thought of being followed, is sure that she wasn't followed and there was nothing to really out there to harm her. She thinks this because she doesn't know that there is someone in the room with her. The man in 'The Red Room' is just as sceptical about ghosts as he was in the beginning. He still doesn't think that it was a ghost in the room that scared him. He has decided that it was, in fact , the fear. 'Yes, the room is haunted.' At first the reader believes that he has changed his mind and thinks that there is a ghost in the room, but then when the old people suggest which dead person it could be, he tells them that it is not haunted by a ghost, so he hasn't actually changed his mind about ghosts. 'There is neither ghost of earl, or ghost of countess in that room, this is no ghost there at all; but far worse, far worse -' I think that he has accepted that he can be scared by something, as his attitude at the beginning was a bit arrogant. I enjoyed both stories, but I think that the ending of 'The Whole Town Is Sleeping' was slightly weak and I also thought that there were a few too many times when they took unnecessary risks which are unrealistic. ...read more.