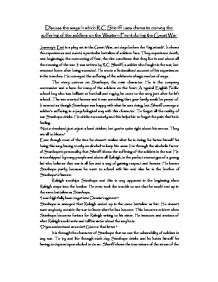 Discuss the ways in which R.C Sheriff uses drama to convey the suffering of the soldiers on the Western Front during the Great War Journey's End is a play set in the Great War

Discuss the ways in which R.C Sheriff uses drama to convey the suffering of the soldiers on the Western Front during the Great War Journey's End is a play set in the Great War, set days before the "big attack". It shows the experiences and events a particular battalion of soldiers face. They experience death, new beginnings, the overcoming of fear, the dire conditions that they live in and above all the meaning of the war. It was written by R.C Sheriff, a soldier who fought in the war, but returned home after being wounded. He wrote a fictionalised account of his experiences in the trenches. He conveyed the suffering of the soldiers in a large number of ways. The story centres on Stanhope, the main character. He is the company commander and a hero for many of the soldiers on the front. A typical English Public school boy who was brilliant at football and rugby, he came to the army just after he left school.. The war created heroes and it was something that your family would be proud of. It seemed as though Stanhope was happy with what he was doing, but Sheriff conveys a soldier's suffering in a psychological way with this character. ...read more.

We've been expecting you. Sit down, won't you." Another example is when Osborne has to leave before the raid to the German Frontline. He knows that the raid is useless and he realises that he is going to die. Even so he remains cheery until it is time to go. He trusts Stanhope to send his few possessions to his wife; with this we see that Osborne is a committed and dedicated soldier. "If anything should happen, would you send these along to my wife." Osborne is the character which has all the makings of a perfect soldier. He is committed, strong-minded, fearless and kind. Osborne knows many things outside the war and culturally richly educated. Sheriff conveys the suffering of Osborne in a very profound way. Raleigh who has just arrived to war and has everything to look forward to is doomed to die almost immediately. Whereas Osborne has been in the company for a long time and is probably the richest character out of the company. Sheriff shows that a man who has survived the war for a long time with luck contrasts with another man who has just arrived and is fated to die very soon. ...read more.

Nevertheless, there is air of contempt about the dug-out; and the italics describe Captain Hardy. Captain Hardy , a red-faced , cheerful looking man is sitting on a box by the table, intently drying a sock over the candle-flame. These italics show in detail how captain hardy is seated on the stage. He is drying his sock on top of a candle flame which is pointless, but he is still a cheery fellow. He is making an effort but there is no use of him doing so. In the perspective of a performer, the stage instructions describe how the character should move. For Hardy he would be sitting and humming; Osborne would enter and go over to the table. If there is a Pause in italics the performer would pause. Overall these beginning italics show how the stage should be set and it contrasts very much with what the stage will look like at the end of the play. Sheriff shows the suffering of the men in various ways. This play creates the outline for any soldier fighting in any war. A little bit of each character is taken and a soldier is produced. Also Journey's End shows you the true meaning of war and how precious life really is. Simran Singh 10/02/04 ...read more.