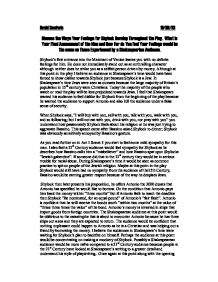 Discuss the Ways Your Feelings for Shylock Develop Throughout the Play. What is Your Final Assessment of the Man and How Far do You Feel Your Feelings would be the same as Those Experienced by a Shakespearian Audience.

David Goodwin 16/06/03 Discuss the Ways Your Feelings for Shylock Develop Throughout the Play. What is Your Final Assessment of the Man and How Far do You Feel Your Feelings would be the same as Those Experienced by a Shakespearian Audience. Shylock's first entrance into the Merchant of Venice leaves you with no definite feelings for him. He does not immediately stand out as an enthralling character although neither does he strike you as a selfish person driven by money. Although at this point in the play I believe an audience in Shakespeare's time would have been forced to show dislike towards Shylock just because Shylock is a Jew. In Shakespeare's time Jews were seen as outcasts because the large majority of Britain's population in 15th century were Christians. Today the majority of the people who watch or read the play will be less prejudiced towards Jews. I feel that Shakespeare wanted his audience to feel dislike for Shylock from the beginning of the play because he wanted the audience to support Antonio and also lull the audience under a false sense of security. ...read more.

During Act 3 Scene 1 Shylock is told of his "daughter's flight". Shylock although angered by his daughter's departure seems more engrossed in the news of Antonio's loss of ships at sea; Shylock is delighted by the news of Antonio's missing ships. You now start to feel dislike for Shylock; he is obviously putting his self-satisfaction and welfare before his own daughters this showing a very selfish side of Shylock. This part of the play shows a very nasty side of Shylock's character. Although a Shakespearean audience would have had the contentment of seeing Shylock's own daughter run away they would now be very angered by the fact that Shylock is going to have the upper hand over a demise of a Christian. The audience I feel at this point would have realised that Antonio needed the ships to return for him to repay Shylock's loan. The audience understood that if Antonio did not repay the bond then Shylock would kill Antonio. This is the first time in the play that you actually feel any real dislike for Shylock. I believe Shylock has had all this anger building up inside him and has just decided to let it all go at one single point in the play "My own flesh and blood to rebel!". ...read more.

This shows how our feelings may be exactly the same for Shylock but for two totally different reasons between the two audiences. As the play progresses, your feelings for Shylock progress to as much as despising the man. In the first part of the play, you feel mild pity because of the way Shylock is treated by Christians. In Act 2 Shylock falls out with his daughter and says how he is going to dinner with Bassino only to destroy him. You now start to feel aversion towards Shylock. In Act 3 Shylock is informed of Antonio's missing ships, Shylock is over the moon so much that he forgets about he disappearance of his daughter, this is where you start to feel real resentment towards Shylock. In Act 4 you feel the same due to the way Shylock behaves towards wanting Antonio's pound of flesh. This shows that it was all just an act that Shylock was putting in the beginning of the play and that his true colours came out towards the end of the play. Shylock is shown to be very selfish and driven on destroying the lives of Christians. ...read more.