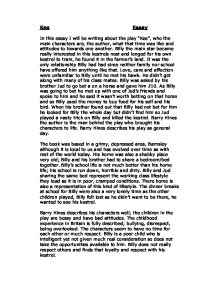 Kes Essay In this essay I will be writing about the play "Kes", who the main characters are, the author, what that time was like and attitudes to towards one another. Billy the main star became really interested in this kestrels nest and longed for his own kestrel to train, he found it in the farmer's land. It was the only relationship Billy had had since neither family nor school have offered him anything like that. Love, care and affection were unfamiliar to Billy until he met his hawk. He didn't get along with many of his class mates. Billy was asked by his brother Jud to go bet a on a horse and gave him �10. As Billy was going to bet he met up with one of Jud's friends and spoke to him and he said it wasn't worth betting on that horse and so Billy used the money to buy food for his self and his bird. ...read more.

Billy and Jud sharing the same bed represent the working class lifestyle they lead as it is in poor, cramped conditions. There home is also a representation of this kind of lifestyle. The dinner breaks at school for Billy were also a very lonely time as the other children played, Billy felt lost as he didn't want to be there, he wanted to see his kestrel. Barry Hines describes his characters well; the children in the play are bossy and have bad attitudes. The childhood experience in Britain is fully described; bullying, disrespect, being overlooked. The characters seem to have no time for each other or much respect. Billy is a poor child who is intelligent yet not given much real consideration so does not take the opportunities available to him. ...read more.

This assignment was interesting and enjoyable to discover how the characters felt; attitudes towards one another and the time when it was set. It is interesting the way Barry Hines describes the scenes in such detail. I would say the main points in the book were, Billy manages to obtain his hawk and puts skill and affection into his relationship with the kestrel, this is the only love Billy shows. Bullying was an essential part in the book, where McDowall sees Billy across the playground and shouts terrible language to Billy which caused a fight. Billy hates the thought of going to work and growing up, his school life has fell apart as he doesn't think he can do well so consequently he gives up and instead he spends time with his hawk. This brings my essay to an end, as it was an enjoyable and exciting assignment. ...read more.