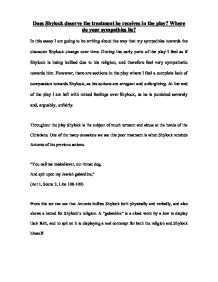 Does Shylock deserve the treatment he receives at the end of The Merchant of Venice?

Does Shylock deserve the treatment he receives in the play? Where do your sympathies lie? In this essay I am going to be writing about the way that my sympathies towards the character Shylock change over time. During the early parts of the play I feel as if Shylock is being bullied due to his religion, and therefore feel very sympathetic towards him. However, there are sections in the play where I feel a complete lack of compassion towards Shylock, as his actions are arrogant and unforgiving. At the end of the play I am left with mixed feelings over Shylock, as he is punished severely and, arguably, unfairly. Throughout the play Shylock is the subject of much torment and abuse at the hands of the Christians. One of the many occasions we see this poor treatment is when Shylock reminds Antonio of his previous actions. "You call me misbeliever, cut-throat dog, And spit upon my Jewish gabardine," (Act 1, Scene 3, Line 108-109) From this we can see that Antonio bullies Shylock both physically and verbally, and also shows a hatred for Shylock's religion. A "gabardine" is a cloak worn by a Jew to display their faith, and to spit on it is displaying a real contempt for both the religion and Shylock himself. Another section of the play where the characters show a real derision towards Shylock is in Act 2, Scene 8, while he is not even present. ...read more.

In my opinion this shows that what Shylock says after this to Antonio is a fa�ade and in reality he is hoping Antonio fails to repay him. I think that Shylock fully intends to cut the pound of flesh from Antonio, should the opportunity arise. During the court scene we see Shylock behave in a very arrogant, ruthless and merciless way. He adamantly refuses to hear any attempts on persuading him to show any mercy. "Till thou canst rail the seal from off my bond, Thou but offend'st thy lungs to speak so loud;" (Act 4, Scene 1, Lines 139-140) From this we can see that the attempts of persuading Shylock are completely in vain, unless they can somehow remove the seal from the bond. This shows Shylock acting in a very stubborn way, as nothing can be done to move him. As well as this, Shylock ignores the Duke, who is a very powerful and important man. This further displays Shylock's arrogance. We also come to understand that Shylock is not merely exacting his revenge due to the fact he has not received his money, as Basssanio offers more. But Shylock declines, and states that: "If every ducat in six thousand ducats Were in six parts, and every part a ducat, I would not draw them; I would have my bond!" (Act 4, Scene 1, Lines 85-87) ...read more.

The Jews were an ethnic minority in Europe at the time and were envied due to their relative success and as they were good with money. I also feel sorry for Shylock as his daughter runs away from home, stealing money from him as well. However, my feelings of sympathy for Shylock begin to wane when he acts very ruthlessly and arrogantly in the court. I can empathise with Shylock and understand why he would behave in such a way, as the Christians are cruel to him. Nevertheless, this does not justify the fact that he would have happily allowed Antonio to bleed to death. I think that he should have been the better person, and shown the Christians that he was above them, and able to forgive. But when Shylock decides he wants to go ahead with the bond, I start to feel less sympathy for him. When Shylock's punishments are given out to him, my sympathies for Shylock return once again. These punishments are very severe, especially having to become a Christian. I think Shylock felt that it could have been worse however, as he leaves quickly and quietly, so that the Duke cannot change his mind. In my opinion, a suitable punishment would have been just the first condition on its own. This was that Shylock must give half of his wealth to Antonio, who would give it to Lorenzo. I don't think that Shylock deserves to have the other two punishments, as they will virtually ruin his life. ...read more.