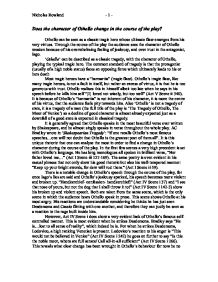 Does the character of Othello change in the course of the play?

Does the character of Othello change in the course of the play? Othello can be seen as a classic tragic hero whose ultimate flaw emerges from his very virtues. Through the course of the play the audience sees the character of Othello weaken because of his overwhelming feeling of jealousy, and over trust in the antagonist, Iago. 'Othello' can be described as a classic tragedy, with the character of Othello, playing the typical tragic hero. The common standard of tragedy is that the protagonist (usually of a high noble status) faces an opposing force which ultimately leads to his or hers death Most tragic heroes have a "harmartia" (tragic flaw). Othello's tragic flaw, like many tragic heroes, is not a fault in itself, but rather an excess of virtue, it is that he is too generous with trust. Othello realises this in himself albeit too late when he says in his speech before he kills him self "[I] loved not wisely, but too well" (Act V Scene ii 340). It is because of Othello's "harmartia" is not inherent of his character, it is more the centre of his virtue, that the audience feels pity towards him. ...read more.

As stated before, a typical tragic hero faces an opposing force that usually leads to his or her death. In 'Othello' the opposing force is arguably one of the most cunning villains in literature, Iago. Through the course of the play Iago continually uses Othello's "free and open nature" (Act I Scene iii 393) so that he will trust him too well and feel distanced from everyone else. "I had rather have this tongue cut from my mouth / than it should do offence to Michael Cassio. / Yet I persuade myself to speak the truth.". (Act II Scene iii 215) Iago constantly destroys everyone else but subtly makes himself look better. It seems as though Iago's trickery with Othello is sure and fall proof in Act IV Scene i when Iago tells Othello that he has seen Desdemona and Cassio sleep with each other. Othello's response is broken up and senseless: "Lie with her? Lie on her?... / Noses, ears and lips!". This response is followed by a physical fall of Othello which symbolizes his mental fall into vicious jealousy, which these 'fits' portray, and thereby his downfall of character. ...read more.

However Iago runs away, he has no pride and the fact that he is returned with an uncertain future, which gives an opportunity for director's of the play to give a definite or ambiguous end to the villain, adds to the strength of the play's conclusion. In conclusion, it is clear and there is enough evidence in the play to say that Othello does undergo a certain change in character, which Shakespeare expresses in his change of behaviour and speech. It must be understood that any feelings of jealousy and anger Othello felt towards Desdemona would have been exasperated greatly by Iago's cunning and great ability to use people's weaknesses, he was "Perplexed in the extreme" (Act V Scene ii 342). The characters in the play divide things into black and white, good and evil. They have no concept of grey or middle ground. Othello is a black man living in a white man's world; he has no sense of belonging and is therefore easily manipulated. This manipulation causes him to change so drastically, however he does repent and in a way returns to his 'original' character just before his death. He regains the calmness that characterised his early speeches and his final words and actions suggest his inherent nobility. ?? ?? ?? ?? Nicholas Rowland - 1 - ...read more.