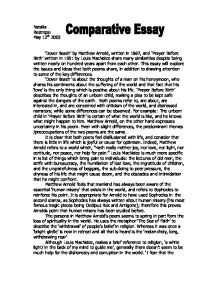 Dover Beach and Prayer Before Birth - Explore the issues and ideas that both poems share, in addition to drawing attention to some of the key differences.

Natalia Restrepo May 12th 2003 'Dover Beach' by Matthew Arnold, written in 1867, and 'Prayer Before Birth' written in 1951 by Louis MacNeice share many similarities despite being written nearly on hundred years apart from each other. This essay will explore the issues and ideas that both poems share, in addition to drawing attention to some of the key differences. 'Dover Beach' is about the thoughts of a man on his honeymoon, who shares his sentiments about the suffering of the world and that fact that his 'love' is the only thing which is positive about his life. 'Prayer Before Birth' describes the thoughts of an unborn child, making a plea to be kept safe against the dangers of the earth. Both poems refer to, are about, are interested in, and are concerned with criticism of the world, and distressed narrators; while some differences can be observed. For example: The unborn child in 'Prayer Before Birth' is certain of what the world is like, and he knows what might happen to him. ...read more.

Whereas it was once a 'bright girdle' is now in retreat and all that is heard is the 'melancholy, long, withdrawing roar' Although Louis MacNeice, makes a brief reference to religion, 'a white light/ in the back of my mind to guide me', generally there doesn't seem to be much help for the dishonesty and corruption in the world. 'I fear that the human race may with tall walls wall me,/ With strong drugs dope me, with wise lies lure me,/ On black racks rack me, in blood baths roll me.' He fears being imprisoned, tortured, and manipulated. He wants to be forgiven for the sins that he knows he will commit, due to he fact that the world will corrupt him. 'Forgive me/for the sins that in me the world shall commit...' The tone of 'Dover Beach' is predominantly one of reflective sadness. Many of the lines and phrases contain long vowel sounds, which slow the pace of the poem and add to the contemplative tone of the piece. ...read more.

Also: 'ignorant armies clashing by night'. This image suggests that the war that is being fought is useless, and that the soldiers who are fighting in it, don't even know what cause they are fighting for. She uses this image to describe human ignorance. Interestingly enough, the images that both poets leave us with is very similar: Arnold asks us to consider our life in this 'dark world' where armies continually kill and main, without really knowing what they are fighting for, whereas MacNeice draws our attention to his fear that he might become a killing machine, 'a lethal automaton' or simply a cog in a machine, with no independence or free thinking of his own. To him, this is a fate worse than death, and he would rather die. What I think, is that the two poems are similar, because they are both evoke depressed feelings coming form the poet. Especially 'Prayer Before Birth', because how can a fetus be so incredibly pessimistic? 'Dover Beach' in my opinion is more poetic and more symbolic, and much more profound; whereas 'Prayer Before Birth' is more superficial and straightforward. ...read more.