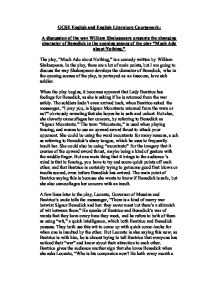 English A discussion of the way William Shakespeare presents the changing character of Benedick in the opening scenes of the play &quot;Much Ado about Nothing.&quot;

GCSE English and English Literature Coursework: A discussion of the way William Shakespeare presents the changing character of Benedick in the opening scenes of the play "Much Ado about Nothing." The play, "Much Ado about Nothing," is a comedy written by William Shakespeare. In the play, there are a lot of main points, but I am going to discuss the way Shakespeare develops the character of Benedick, who in the opening scenes of the play, is portrayed as an insecure, love sick soldier. When the play begins, it becomes apparent that Lady Beatrice has feelings for Benedick, as she is asking if he is returned from the war safely. The soldiers hadn't even arrived back, when Beatrice asked the messenger, "I pray you, is Signor Mountanto returned from the wars or no?" obviously revealing that she hopes he is safe and unhurt. But also, she cleverly camouflages her concern, by referring to Benedick as "Signor Mountanto." The term "Mountanto," is used when playing fencing, and means to use an upward sword thrust to attack your opponent. She could be using the word mountanto for many reasons, such as referring to Benedick's sharp tongue, which he uses to frequently insult her. She could also be using "mountanto" for the imagery that it creates of the upward sword thrust, maybe being a kind of gesture with the middle finger. ...read more.

Also in this conversation with Claudio, Benedick admits to Claudio that he thinks Beatrice is better looking than Hero by telling him that, "if she were not possessed with fury, exceeds [Hero] as much in beauty as the first of May doth the last of December." Here he is revealing that he finds Beatrice more attractive, like the first of May (spring) is than the last of December (winter). In the same conversation, Benedick describes marriage as a "yoke." A yoke is a heavy collar which animals are made to wear when working. He is implying here that marriage is a huge burden around a man's neck, and that once married, a man cannot do the same things he could do if he were not married. Also he could mean that the man with the yoke around his neck, is no longer self dependent, but is controlled by his wife. This prospect terrifies Benedick and he seems determined to avoid falling in love. In lines 155-215, Don Pedro enters the conversation, and so Benedick immediately stops talking about how much sweeter Beatrice is, and says, "I will never trust a woman, I will live a Bachelor." Benedick says to Claudio, that he will never trust one woman, and that he would rather live alone and not have the responsibility of caring for a wife. ...read more.

Suddenly he feels giddy and in love even more. All of a sudden women aren't that bad and he speaks a second soliloquy where he keeps reassuring himself that it is not a trick, and that he has no reason to doubt it. The soliloquy is effective as the audience can hear the dramatic change in Benedick's character. He then goes into denial again by asking himself, "why" and if it is true. Benedick decides he must make his feelings known to Beatrice, and decides to sort out his own faults; he had convinced himself he was perfect and that Beatrice had something wrong with her for not loving him. But now Benedick can admit he loves her. He then goes on to say that he will get a lot of grief if he admits being in love with her, as he has been against love for so long. But he then remarks that these "paper bullets" will not affect him as he is so in love, and makes excuses to have babies with her, "The world must be peopled." Benedick also makes another excuse; he had said he intended to die a bachelor. He now pronounces that he did not think he would live as long as this, as he is a soldier. This soliloquy completes the change in Benedick's character. He has transformed from pretending to be a misogynist to being quite openly love struck. By the end of Act 2, Scene 3 the audience have no doubt that Beatrice and Benedick will marry. ...read more.