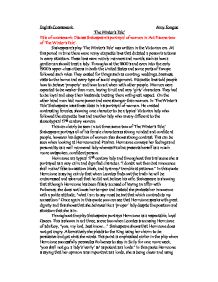 English Coursework Amy Tongue 'The Winter's Tale' Title of coursework: Discuss Shakespeare's portrayal of women in Act 3 scene two of 'The Winter's Tale'. Shakespeare's play 'The Winter's Tale' was written in the Victorian era. At this period in time there were many etiquette laws that dictated a person's actions in every situation. These laws were mainly manners and morals, such as how a gentleman should treat a lady. Throughout the 1800's and even into the early 1900's upper-class citizens in both the United States and some parts of Europe followed such rules. They existed for things such as courting, weddings, business, visits to the home and every type of social engagement. Etiquette laws told people how to behave 'properly' and how to act when with other people. Women were expected to be weaker than men, having timid and very 'girly' characters. They had to be loyal and obey their husbands, treating them with great respect. On the other hand men had more power and were stronger than women. In 'The Winter's Tale' Shakespeare uses these ideas in his portrayal of women. He created contrasting females, showing one character to be a typical Victorian lady who followed the etiquette laws and another lady who is very different to the stereotypical 17th century woman. This can clearly be seen in act three scene two of 'The Winter's Tale;' Shakespeare portrays all of his female characters as strong minded and confident people, however his depiction of women also shows strong contrast. This can be seen when looking at Hermione and Paulina. Hermione conveys her feelings and personality as a well mannered lady whereas Paulina presents herself as a much more outspoken, confident person. ...read more.

In contrast to Hermione, Paulina is portrayed in a very different way. Shakespeare shows her to be a very confident, outspoken character who isn't afraid to speak her mind and let her opinions be known. Paulina thinks a lot of the Queen, she says, "A brave innocent soul," and she stands by Hermione throughout the play. Paulina's strong personality is shown during act three, scene two when she comments on Leontes' mistake, "That did but show the fool inconstant." This shows that she is not scared of the King despite his position in society. Also Paulina is very sure of herself, "I shall do good," this emphasizes her confidence and bravery, she is willing to stand up to Leontes even though he has the power to take her life away, she says to him, "Woe the while" and "I do repent!" This shows how Paulina is constantly trying to make Leontes see sense. Shakespeare portrays her as being confident enough to shout at the King, "Look down/ and see what death is doing." This quote gives the reader/audience the impression that Paulina is smart and opinionated. Secondly Paulina is very loyal to Hermione as a servant; she is willing to do anything, even risking her own life as a result of confronting Leontes. Paulina respects the queen and you can see this when she says to the King, "I say, I come/ from your good Queen," and once again she tells him, "good Queen my lord, good Queen" this shows that Paulina will say what she thinks about the Queen even though Leontes disagrees. Unlike Hermione, Paulina is not afraid of the consequences. ...read more.

He shows women to be the stronger sex whereas in the 17th century it was the men who were stronger and more powerful than the women. All of these ideas can be portrayed clearly when the play is performed on stage. The lighting, dialogue and positioning of the characters all help to show how Shakespeare portrays women in Act three, scene two of 'The Winter's Tale'. Firstly, during the trial scene Leontes should always be in a higher position on stage than Hermione. This would emphasize the relationship between the Queen and King showing that Leontes is in charge and has more power. It would also convey the idea that Hermione is weaker and obeys her husband because she is lower and is looking up at him. This would help to show the audience Shakespeare's ideas, that Hermione is a typical, well behaved lady. When Hermione makes her speech in court she should speak in a calm, soft, quiet voice facing upwards to Leontes with a dim light covering the stage. On the other hand when Paulina enters and talks to the King she should be level with Leontes, speaking in a loud, clear voice with a spotlight shining on her. These differences in how the women are shown on stage would help the audience to see Shakespeare's contrasting Portrayal of women in act three scene two of 'The Winter's Tale.' Hermione's performance would show she is weaker than Leontes and is a calm, caring lady, very similar to a typical woman in the 17th century who followed the etiquette laws. Alternatively Paulina's performance would show she is a strong female character who is outspoken and equal to men which is very different to the usual 17th century lady. This conveys the audience the contrasting ways that Shakespeare portrays women in his play. ...read more.