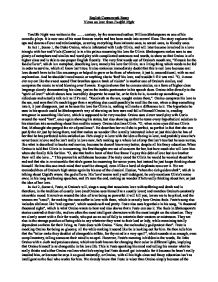 English Coursework Essay Views on love from Twelfth Night Twelfth Night was written in the ...... century, by the renowned author, William Shakespeare as one of his comedic plays. It is now one of his most famous works and has been made into several films. The story explores the ups and downs of love and relationships, covering everything from intimate ones, to sexual ones, to friendly ones. In Act 1, Scene 1, the Duke Orsino, who is infatuated with Lady Olivia, and will later become involved in a love triangle with her and Viola (Cesario) is in a his palace mourning his love for Olivia. Shakespeare makes sure to use plenty of metaphors and similes and word-play with complicated sentences and words, to show us that Orsino is of a higher class and is able to use proper English fluently. The very first words out of Orsino's mouth are, "If music be the food of love", which is a metaphor, describing love, namely his love for Olivia, as a living thing which needs to be fed in order to survive, which all know isn't true. It also makes us immediately doubt that this is real love because real love doesn't have to be like encourage or helped to grow or be there of whatever, it just is, unconditional, with no real explanation. And he shouldn't need music or anything else to 'feed' his love, and wouldn't if it was real. "O, it came o'er my ear like the sweet sound That breathes upon a bank of violets" is another one of Orsino's similes, and compares the music to wind blowing over flowers. It again shows that he can use similes, as a form of higher class language clearly demonstrating his class, just as the iambic pentameter in his speech does. Orsino talks directly to the "spirit of love!" which shows how incredibly desperate he must be, or he feels he is, to make up something so ridiculous and actually talk to it as if it's real. ...read more.

((((Which ironically is what Toby cares about but Toby makes it clear and Orsino sugar coats it)))) There are two parts of Act 2, Scene 4 about Orsino, which could be displayed in different lights. The first is when Cesario says "But what if she cannot love you, sir?" referring to Olivia and Orsino replies with "I cannot be so answered". The way Orsino says this depends on the way the actor playing him wants to portray him. He could say it angrily, exuding arrogance, because he thinks that no one could answer him like that, no one could refuse him. Or he could say it with stress on the "I", again showing his arrogance, but says it in a lower voice and calmly and very knowingly as if he knows he is so amazing that Olivia couldn't possibly turn away from him. Or, the actor could choose to show a more vulnerable, nice, not so bigheaded side of Orsino and say it sounding slightly confused and worried, like 'Oh my god what if she does reject me". Then there's the part where Cesario is telling him about her "sister" who never told her love and Orsino asks him "But died thy sister of her love my boy?". This could be interpreted in two ways. The actor can either say this as if he was challenging him, like his sister couldn't possibly have so much love that she would die of it, like he could or he could be genuinely concerned and interested in what happened to her. In Act 1, Scene 3 Sir Toby and Maria speak in prose, which Shakespeare uses to show that they are lower class characters, which isn't completely true because technically Sir Toby is of a higher class. This way of speech is in contrast to Orsino's poetic language. Toby uses word play just like Orsino did and it shows that being higher class doesn't define how smart you are (just like Sir Andrew who is of a higher class than Toby and is probably the stupidest character in the play). ...read more.

he could never love anyone else, he can just immediately change and love another person in an average of about 20 seconds. In total it was enlightening to see how many ways you can view love and how it changes who you thought the person was. "Give me excess of it, that surfeiting, The appetite may sicken and so die". Orsino (still believing that music will feed his love) wants so much of it that it will ruin his appetite for llove so he wont have to go thorhg all the pain of loving Oliva, I think. I also belive thsat someone in love wont want it to go away I think that he is listening to music and saying this about it because it's his replacement for the love Olivia should be giving him. He is giving her so much of what he believes is love and he isn't getting anything back from her so he sees himself as starved of love, and when you are so starved of something, you want a lot of it and since he's not going to be getting her love anytime soon, he's substituted it with music and has said that he wants "excess of it, surfeiting, The appetite may sicken,". I think he's got everything money can buy and he now just wants true love and he isn't receiving it and he himself doesn't really feel it, its just a shallow emotion, which he convinces himself is love. It's like chocolate. With really rich chocolate with a lot of taste, you only have to have like one piece or bar or whatever, and that's true love. Other chocolate that tastes really good, but doesn't have so much taste that one bite is enough, you have to keep having and having and that's Orsiino;s infatuation with oLoivia. Orsiono then talks directly to "the sprit love" he has to feel misery to feel anything prove sits not love. He wasnts so much of it fed so it dies. ...read more.