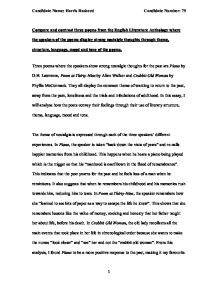 Compare and contrast three poems from the English Literature Anthology where the speakers of the poems display strong nostalgic thoughts through theme, structure, language, mood and tone of the poems. Three poems where the speakers show strong nostalgic thoughts for the past are Piano by D.H. Lawrence, Poem at Thirty-Nine by Alice Walker and Crabbit Old Woman by Phyllis McCormack. They all display the common theme of wanting to return to the past, away from the pain, loneliness and the trials and tribulations of adulthood. In this essay, I will analyse how the poets convey their feelings through their use of literary structure, theme, language, mood and tone. The theme of nostalgia is expressed through each of the three speakers' different experiences. In Piano, the speaker is taken "back down the vista of years" and re-calls happier memories from his childhood. This happens when he hears a piano being played which is the trigger so that his "manhood is cast/Down in the flood of remembrance". This indicates that the poet yearns for the past and he feels less of a man when he reminisces. ...read more.

The structures of the poems have been similarly utilised to suit the speakers' stream of consciousness. Extensive use of language and forms of imagery is applied in the three poems. Sensory details like "Softly, in the dusk, a woman is singing to me" are effectively utilised in the first stanza of the poem, Piano. In Poem at Thirty-Nine, the use of alliteration with the 't' sound in "he taught me that telling the truth" makes a 'tutting' sound which fits in well with the context about the lessons learnt by the speaker. "He cooked like a person dancing in a yoga meditation" is a simile that reflects the joy and passion he felt while cooking. The 'd' sound alliteration in "Dark days are upon me" in the poem Crabbit Old Woman emphasises the darkness and impending doom that is soon to befall the old woman. The speaker uses an imperative command, "I'll tell you who I am" to force the nurses to acknowledge her real personality. The fact that the old woman can recall past events in her life in chronological order shows her good memory. ...read more.

This makes the memory seem sadder because she is portrayed as an unfortunate victim. The poet's true objective in writing the poem is to inform us that we should see beyond the old, frail bodies of an elderly person and see the person inside them. The mood and tone of the three poems greatly affects the way in which the memories of the speakers are portrayed to the reader so therefore, this was used successfully by the three poets. I believe that these three poems are linked by the speakers' thoughts of reminiscence about the past because of issues in their life like the desire to return to their childhood, death, loneliness and the resistance to stereo-types. The intense nostalgia which runs like a thread connecting all three poems evokes a sense of pathos. I find that the poem, Piano represents strong nostalgic thoughts effectively and is coincidentally my favourite poem because of the positive feeling that it conveys through use of many literary devices, use of language and imagery. The pleasing effect that it had on me can be referred to the warm and comfortable scene that is established by the poet. ?? ?? ?? ?? Candidate Name: Harris Rasheed Candidate Number: 79 1 ...read more.

This essay is a thorough analysis of the theme, structure, language and tone of the three poems selected. It analyses the effect of the writers' choices and the consequent effect on the reader. A personal response to the texts is included. Points are well-supported with evidence from the text.