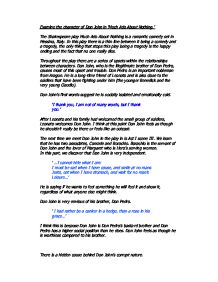 Examine the character of Don John in 'Much Ado About Nothing'.

Examine the character of Don John in 'Much Ado About Nothing.' The Shakespeare play Much Ado About Nothing is a romantic comedy set in Messina, Italy. In this play there is a thin line between it being a comedy and a tragedy, the only thing that stops this play being a tragedy is the happy ending and the fact that no one really dies. Throughout the play there are a series of upsets within the relationships between characters. Don John, who is the illegitimate brother of Don Pedro, causes most of this upset and trouble. Don Pedro is an important nobleman from Aragon. He is a long-time friend of Leonato and is also close to the soldiers that have been fighting under him (the younger Benedick and the very young Claudio). Don John's first words suggest he is socially isolated and emotionally cold. 'I thank you, I am not of many words, but I thank you.' After Leonato and his family had welcomed the small group of soldiers, Leonato welcomes Don John. ...read more.

This shows Don John is also jealous of Claudio, as well as Don Pedro. The scene Don John next appears in is Act II scene I. This part of the play is set at a masked party Leonato has organised to welcome his guests. This is the first scene we actually see Don John trying to create trouble. He does this by telling Claudio that Don Pedro fancies Hero and is trying to get her for himself. 'Sure my brother is amorous on Hero, and hath withdrawn her father to break with him about it...' We know there is no truth in this and that Don Pedro is merely trying to win Hero for Claudio. Don John is trying to damage the relationship between Don Pedro and Claudio, and trying to ruin the relationship between Hero and Claudio. I think this is based on the jealousy we saw earlier in the play where Don John feels Claudio is more like Don Pedro's brother than he is. ...read more.

Claudio previously revealed his suspicious nature to the audience, when he believed Don John's lie that Don Pedro had betrayed him at the masked party. Now his susceptibility to suspicion returns to haunt, this time with the support and encouragement of Don Pedro. The play goes on to the climax, which is the scene of Hero and Claudio's wedding. Claudio, as he swore he would, totally humiliated Hero after what he had saw from beneath her balcony. He told everyone she had been unfaithful to him. Hero's family decide to hide her away until the truth has come to light. Soon after, Borachio was overheard bragging about the part he plays in the breakdown of the relationship. Finally, he is arrested, along with Don John. Everyone learns that Hero is innocent, and Claudio, who believes she is dead, grieves for her. In the end Claudio and Hero marry. This is the happy ending which makes this a romantic comedy and not a tragedy. ...read more.