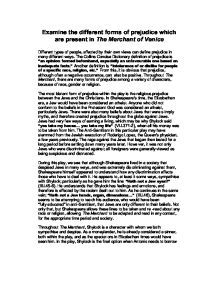 Examine the different forms of prejudice which are present in The Merchant of Venice Different types of people, affected by their own views can define prejudice in many different ways. The Collins Concise Dictionary definition of prejudice is "an opinion formed beforehand, especially an unfavourable one based on inadequate facts." Another definition is "intolerance of or dislike for people of a specific race, religion, etc." From this, it is obvious that prejudice, although often a negative occurrence, can also be positive. Throughout The Merchant, there are many forms of prejudice among a variety of characters, because of race, gender or religion. The most blatant form of prejudice within the play is the religious prejudice between the Jews and the Christians. In Shakespeare's time, the Elizabethan era, a Jew would have been considered an atheist. Anyone who did not conform to the beliefs in the Protestant God was considered an atheist, particularly Jews. There were also many beliefs about Jews that were simply myths, and therefore created prejudice throughout the globe against Jews. Jews had very few ways of earning a living, which may be why Shylock said "you take my house... you take my life" (VI.I.371-2), when all his money was to be taken from him. The Anti-Semitism in this particular play may have stemmed from the Jewish execution of Roderigo Lopez, the Queen's physician, a few years previously. The rage against the Jews that began then lasted for a long period before settling down many years later. ...read more.

Throughout the entire play, the prejudice amongst the Christians and Jews is obvious. It is not hidden in any way, particularly in the trial scene. The discrimination against Shylock is obvious, as the Duke wants to prevent the bond from being taken all the way through; "we all expect a gentle answer Jew" (IV.I.34). This is also an example of how the characters use the word "Jew" when speaking to Shylock. In the eyes of the other citizens of Venice, he does not have an identity other than that of "Jew"; "mark, Jew" (IV.I.308) said by Gratiano and "the Jew shall have all justice" (IV.I.317). The bias throughout the most important scene of the play, the trial scene, is blatantly obvious. The Duke begins the trial by making a speech calling Shylock "an inhuman wretch" (VI.I.4), and throughout Shylock is considered the evil one. The whole trial scene is inevitably going to go the way of the defendants, or the Christians, through Portia's arrival and the discrimination against Shylock. While the above deals with the false religious ethics of the play, there is also a lot of prejudice due to colour. As the caskets her father left are choosing Portia's fate, the Prince of Morocco decides to attempt to win Portia as his bride. Portia's father is quite intelligent in that he creates a method by which his daughter cannot be prejudiced in anyway when her husband is being chosen. ...read more.

However, it also introduces the idea that Jews are the same as anyone else "Fed by the same food, hurt by the same weapons" (III.i.47-8) and shows that nothing should be judged by appearance "You that choose not by the view... choose as true" (III.ii.131-2). Shakespeare may have fostered a hope that these small hints at prejudice being unjust and wrong may have been recognised by some of his audience, and slowly prevented prejudice from occurring as much as it had done. I think this may have had great effect throughout the ages; if it had the same effect on the majority of the Elizabethan audience as it did on myself, it would have discouraged prior judgement, particularly on Jews. There is often great debate about the audience for whom Shakespeare truly wrote his plays. Was it for the Elizabethan audience we imagine, and were the plays shown on a stage with no scenery? Or was it for people throughout all ages, genders and races, to teach them about discrimination, and how wrong it may be? Did William Shakespeare intend his plays to be seen by millions of people in many different forms, adapted and changed to suit different races and ages? The prejudices shown in The Merchant of Venice had been present for many years before Shakespeare's time, and will be present for many years in the future. This play can be used to demonstrate to us where we go wrong, and how we discriminate against many people every day. Emily Ford 11RR ...read more.