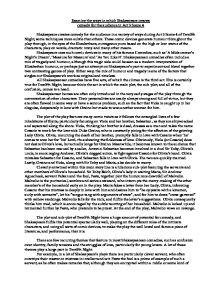 Examine the ways in which Shakespeare creates comedy for the audience in Act 3 Scene 4 Shakespeare creates comedy for the audience in a variety of ways during Act 3 Scene 4 of Twelfth Night, some techniques more subtle than others. These comic devices generate humour throughout the play through, in the eyes of the Elizabethans, outrageous puns based on the high or low status of the characters, play on words, dramatic irony and many other means. Shakespeare uses such comic devices in many of his famous Comedies, such as 'A Midsummer's Night's Dream', 'Measure for Measure' and 'As You Like It'. Shakespearean comedies often include a mix of tragedy and humour, although this tragic side could be seen as a modern interpretation of Elizabethan humour, or perhaps just an attempt on Shakespeare's part to experiment and blend together two contrasting genres of play. Either way, the mix of humour and tragedy is one of the factors that singles out Shakespeare's work as original and timeless. All Shakespearean comedies have five acts, of which the climax is the third act. This is certainly true for Twelfth Night, because this is the act in which the main plot, the sub-plot, and all of the confusion, comes to a head. Shakespearean heroes are often only introduced in the very early stages of the play through the conversation of other characters. Their personalities are nearly always strong and full of virtue, but they are often flawed in some way or have a serious problem, such as the fact that Viola is caught up in her disguise, desperately in love with Orsino but made to woo another woman for him. The plot of the play features many comic twists as it follows the entangled lives of a few inhabitants of Illyria; particularly focusing on Viola and her brother, Sebastian, as they are shipwrecked and separated along the shore. ...read more.

One of the main comic scenes occurs in Act 3 Scene 4 where Malvolio dons a strange costume whilst fulfilling the demands of the fake letter. Proof of this is found when Malvolio says that "this cross gartering" causes "some obstruction in the blood". There is also a pun when he states that he is "not black in my mind, though yellow in my legs", meaning he is not sad, or in a black mood, but his legs are yellow. The image of the stark, puritanical Malvolio dressed in such a gaudy outfit is hilarious, especially when paired with the fact that his actions and words are full of "ridiculous boldness", which is in stark contrast to his true, or original, character. Visual comedy, which is a form of comic prop, provide humour that is easy to understand- the fact that Malvolio is dressed in yellow stockings whilst talking suggestively to Olivia is slapstick humour that can be understood by anyone in the audience. In this particular scene, Shakespeare makes the most of the visual comedy by building up the suspense leading to the scene in order to make it even funnier. For a start, in Act 2 Scene 5, Malvolio reads aloud the letter for the first time, and the audience begin to greatly anticipate the scene in which he will fulfil the letter's command to "see thee cross-gartered". Furthermore, at the beginning of Act 3 Scene 4 Maria states that Malvolio is "sure possessed"; although at the time he is not on stage. This builds the suspense further, heightening the comedy when Malvolio does eventually appear, clad in his strange and laugh-provoking costume. The fake letter, written by Maria, is another comic prop, essential to the central comic scenes of the play. Act 3 Scene 4 shows the consequent comedy of the letter through Malvolio's strange "midsummer madness," as he fulfils the demands of Maria, writing as though she were Olivia. ...read more.

After reading through the text, I have come to the conclusion that the use of comic props and the role of the fool are the most effective, and two of the most important, comic devices used throughout the play, especially in Act 3 Scene 4. The letter faked by Maria is essential to a lot of the humour in the scene, and sets up perfectly the dramatic irony of Malvolio's belief that Olivia loves him. I feel that the letter is a prop that acts as a cornerstone for the sub plot- a central comic device that culminates in the hilarity and chaos of Malvolio's dressing "cross gartered", whilst flirting outrageously with the shocked and confused Olivia. The role of the fool is also a vital comic device because it adds humour to a lot of scenes throughout the play. Feste is an essential part of Twelfth Night because he is the link between the two sets of characters- the high and the low- and, being an allowed fool, is permitted to comment on situations, criticizing various actions and words of other characters often in a mocking tone. Feste provides an alternative view to events in the play, and the fact that he is a very important role in the play is, in my opinion, underlined by the fact that at the end he "is given the last word and is left in possession of the stage". To conclude, Shakespeare's Twelfth Night contains an array of different devices used, very effectively, to create comedy, and so is similar to plays such as 'A Midsummer Night's Dream'. Many of the jokes and puns included in Shakespeare's comedies were even more hilarious during the Elizabethan era due to attitudes at that time towards the way in which certain people should act, however, Twelfth Night has stood the test of time very well and is still very funny when watched, or even read, in this modern time. ...read more.